$1.2m Raised To Free You From Your Luggage

You've just arrived at a new city and can't wait to explore. There's so many sites to see but you've still got your suitcase. What do you with it? Anthony Collias and Jacob Wedderburn-Day think Stasher is the answer. They've created hundreds of "stash points" next to major stations and attractions to free you from your luggage on arrival and departure days. 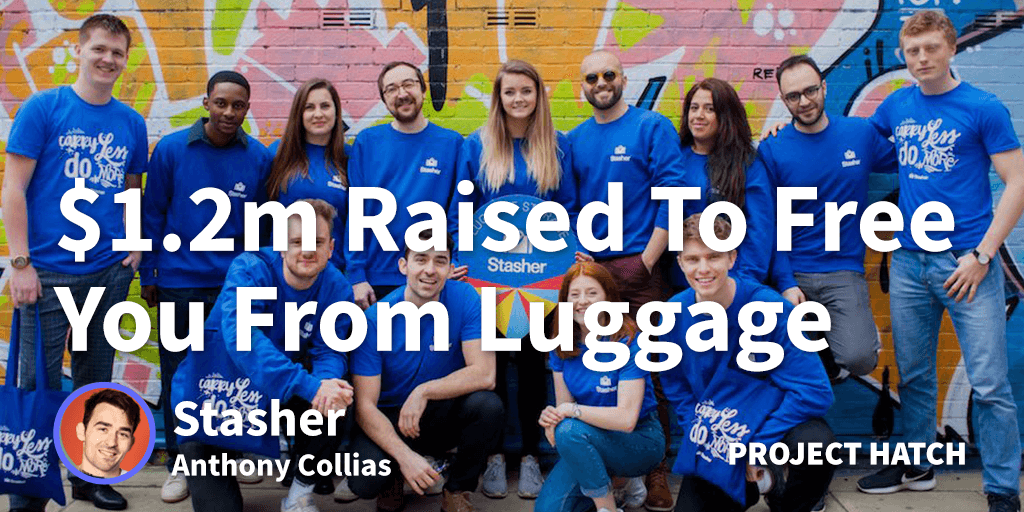 You used to live near Kings Cross - how did that lead you to seeing enough opportunity in bag storage to create Stasher? And how did you meet your co-founder?

My co-founder and I met at uni, we both studied economics at Oxford. After graduating we were interested in pursuing entrepreneurship.

As you mentioned, I lived between Euston and Kings Cross and my brother was a student at City University in Central London. We saw tons of international students there and we always had friends asking if they could leave stuff at our apartment while they went home for half terms and such. This is when Jake and I realised there was an opportunity to use people's homes for storing bags.

Although the first use case was for students who are going home for half terms but we thought that we could open it up to any storage use case. we signed up our homes on a makeshift platform and quickly realised that the self-storage market is pretty saturated - both in terms of large companies that already existed and in terms of small companies that are innovating in that space.

However, there was no innovation in the short-term market and everyone that was using our service was actually using it for short-term one day storage - Typically for backpacks and suitcases. So we decided it made more sense to focus on that niche. We also saw the need for people to be able to book on demand as we typically got a message the day before or the morning of their arrival.

We quickly got sick of running back to our homes to let people in, and that is when we realised it made more sense to work with local businesses who are open anyway. That also opened up a strong case for us to take a much larger chunk of the money. When revenue is ancillary for a business that's open anyway you don't need to share an as large portion of the cash to make it worthwhile for them to provide the service.

How did you then validate the idea and how much did you spend in doing so?

I think we put in maybe £100-150 each. We found a platform called ShareTribe and I really recommend it for MVP’s. It’s a rental marketplace, software-as-a-service business and cost only £30-50 per month.

So we purchased this software, decided we would work on it for 3-6 months and if we saw traction we would pursue it further. That’s exactly how we validated it, we set up a simple website, put some google ads up for terms like “luggage storage kings cross”. At that time no one was advertising on the term so it was only ~£0.10 per click.

What made you go after funding?

Also the tax incentives for the first £100-150k that you raise are so strong that it’s actually quite reasonable to raise. It gave us the opportunity to work on it full time which we felt would let us achieve much more.

There was One thing that we chose specifically to avoid as we saw funding the business as an important part of validating We made a point of not accepting money from friends and family in the first round. I have an article online about this (you can have a look at it here)- to keep it short we thought it was important to get investors at arms length to validate our progress and make sure we weren’t just asking family and friends to fund us to do something stupid.

I saw that you took funding from the Big Yellow Storage founder and some other notable investors - were they able to help you in ways on top of just giving cash?

When we raised from the CEO of Big Yellow Storage we saw ourselves as a storage business. It goes without saying that in general business terms he was immensely helpful. He’s a clued up guy, he's very friendly and was always happy to take a call.

As we grew we realised we were more of a travel business than a storage business, as people typically stored their bags when travelling.

That’s when we took part in Expedia's Hotel Jumpstart, which allowed us to expand our network and gain valuable skills in the travel industry. We ended up winning the competition and brought on the ex-president of Hotels.com as an investor and advisor.

Some of our other investors include a fund called HOWZAT, they were the early funders of Trivago, they were also the owner/operators of cheapflights.com which became Momondo group.

We also brought in some cash from some marketplace experts. A fund called VentureFriends who’ve invested in and personally run a bunch of marketplace businesses.

We really had a bias towards investors who have operational experience and it has been helpful.

Our investors who were in the travel space gave us introductions to potential candidates for hiring but also strategic introductions, whether that’s people within large organisations or people we meet at conferences.

Operationally - we catch up with all of our investors at least once a month and we’ll talk through questions like “what kind of things have you tried recently?”, “have you tried this, one of our other portfolio companies tried it and it worked really well”. “Here’s a contractor you can maybe work with”, “here's someone you can potentially hire”. So a good mix.

Have you seen any downsides to raising money?

We haven’t had a negative experience but there is stuff to look out for.

People glamorize the process of raising money as if raising money equals succeeding in your business. Raising money is a step that you take, and in fact a distraction, that allows you to fulfil a promise to grow the business. It is not the end goal. There’s a Winston Churchill quote I particularly like: “This is not the end. It is not even the beginning of the end. But it is, perhaps, the end of the beginning.” Which is quite apt when it comes to raising money. People celebrate raising $1 or $10 million but actually they’ve just made a commitment to grow their business a lot in the face of uncertainty.

Make sure that the dilution that you face is less than the increase in value you hope to achieve otherwise you’ve literally just given away value.

What does it cost to store a bag and what margin are you seeing?

It costs about £6, $6 or 5/6€depending on the city. We retain about half of that. The bag storage location takes about half - so in the UK our typical standard fee is £2.50 per bag per day for hosts. In some territories, the cost of business is higher so they might get a higher proportion.

What is the ad cost associated with each purchase?

It’s fairly sensitive data but what I will say is that we’re profitable on first purchase.

Are you seeing people re-use Stasher?

It’s great that we see not just people coming back but we’re also seeing that the rate at which people are coming back is improving with every cohort!

Are you looking to upsell purchasers in anyway?

There’s lots of completely new services we could launch including luggage delivery. Another one that we’re considering quite seriously is utilizing storage facilities for non travel related use cases - B2B use cases for example.

Potentially like last mile delivery, potentially for exchange of goods for businesses. It’s something we’re exploring.

From what you were saying earlier, Adwords ads seem to be the largest driver of sales but how else have you driven sales?

Search is important but like any travel business we do find that partnerships are really valuable. There's loads of companies whose customers are likely to need our services so we form arrangements with them so they refer their customers to us. Sometimes we’ll give them a discount or a kickback, depending on the specific situation. That’s the channel we’re focusing on and we think it’ll lead to huge growth in the future.

You recently expanded to the US, have you noticed any differences between operating in the two regions?

One to consider is that we don’t work with any unionised hotels in the US at the moment, simply because we have to work out how we can work with unions, which is obviously a big endeavour.

In terms of how we roll out it’s not really different, we follow the same game plan and it functions quite well.

Is there a way you vet the places you store the bags and have there been any horror stories?

Very minimal horror stories, we’ve actually never had a claim on our insurance despite having stored several hundred thousand bags.

In terms of vetting, we work with contractors or members of our team or groups of hotels/shops where we communicate with them directly where we vet them. Otherwise we use a third party service that’s like a proxy checker. It’s not their core focus but they do us a favor by doing it.

In reality, we’re storing bags. We tell people, “don’t leave your passport” and I think that’s just common sense. The very worst is that maybe a shop owner is ill and leaves early so someone can’t access their bag, in which case we’ll facilitate shipping.

What apps and tools power your business?

Slack’s kind of a given. Zapier is super useful. Another one people may not have heard of is Supermetrics - a tool that lets you easily move database information into sheets and excel, it’s a good tool for team members who aren’t so comfortable with SQL. You can pull from loads of different data sources and everyone is comfortable playing with that in Excel.