Aura Vision provides visitor analytics to retailers using their existing CCTV and security cameras. So it’s a little bit like Google Analytics for the offline world in that we describe what types of people come into a store, what people do there. We give the retailer an understanding of how their store is being perceived and how it’s performing in terms of whether they're targeting the right demographic. We look at whether people going to the areas of the store that the owners are expecting and spending enough time with the right types of products. 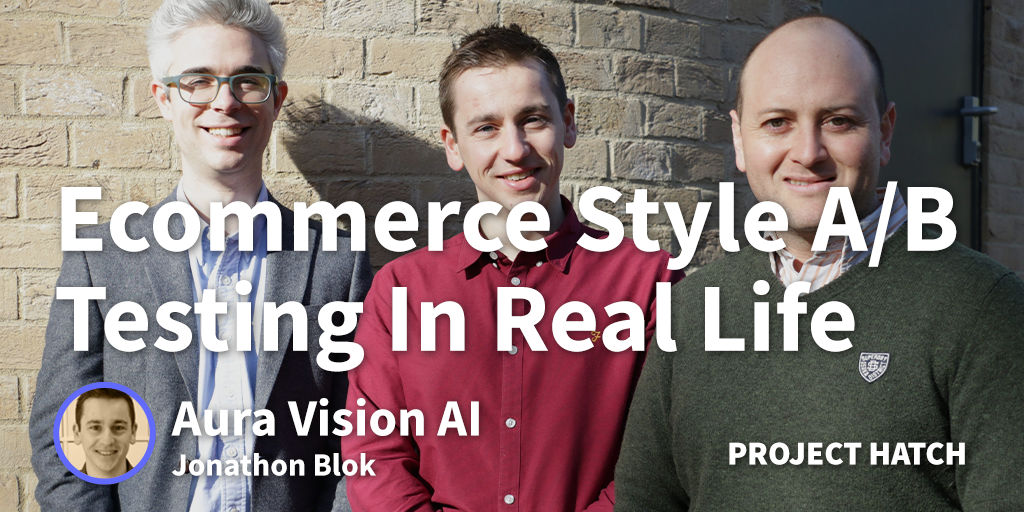 My role is the chief product officer. So I'm in charge of charge of data visualization, data storage and the data retrieval side of things. I also interact with our customers about where they would actually use this data to affect their stores. The other cofounders are, Jaime who's the CTO and Dan who's CEO. Both have PhDs in computer vision, which is the technology we use under the hood. So our algorithms have come straight from their PhDs.

Who uses this technology? Are you focusing on supermarkets or retail stores?

We're focusing less on supermarkets to be honest and more on specialty retail. So things like fashion, homewares and mobile phone stores. We target stores where conversion rate is typically quite a bit lower than average.

We come in to help retailers improve conversion rates. So, if you move this product here or experiment with changing a marketing display in the store or something, you can affect conversion rates. Even a 1% improvement can have huge impacts for a store.

Supermarkets obviously have like crazy high conversion because you don't go into Walmart to not buy something. So it’s less effective there. We typically go after chain stores and specialty retailers. Generally, we wouldn't work with someone with just one store - we focus on chains.

What can retailers understand from your data? Are you looking at their face so you can retarget these people?

So it's all completely anonymous. We don't actually know who is coming into the store or their specific identity. We detect that in the video that a person appears to be a human and we're determining that age and gender. We don't recognize the individual people.

What can they actually do with that though?

One of the really popular use cases is just A/B testing the window displays. If you can increase footfall, that will have a huge effect on your sales as well. You can test different products, different promotions in the window and see if you can capture more people from outside.

Wow and have you got any results that you can share on that?

We did an experiment with a client last year and they saw 9% increase in footfall. We actually analyzed the direction of passing traffic outside the store and they had a huge digital screen that they just invested in. But their screen was facing people coming from the right, and 75% of people walking past outside were coming from the left, so essentially only one quarter of the passing traffic was seeing the screen. So they just moved it to the other side so that more people were viewing it and that caused more people to see it, which meant more people came into the store.

We typically sell to head office so we'll go to trade shows and events. We'll also try and find them on Linkedin to start conversations. We just try and reach people in places where they are rather than a pure sales play. We typically find that they're looking for something like this or they've tried something similar before. They might have tried Bluetooth beacons or Wifi tracking which doesn't really work so well and they haven't really got the end result that they wanted. These types of tracking use people mobile phones - they are only accurate to between 5-10m, require a lot of new hardware in the store, and also fall foul of new GDPR legislation, so we fix a lot of these issues.

How much does it cost to try your service?

So we charge an annual license cost per camera. We can just use the existing cameras though. So in comparison to other tracking solutions that need bespoke hardware in the store, it’s quite a bit cheaper. The actual price point depends on depends on scale and the contract length.

I saw that you went through YC. How was that?

Yeah. It was pretty revolutionary for our business. We were actually running the company for just over a year before we went to YC and had a small amount of funding from an incubator in London. That got us through last year.

We went to YC to open access to the US market and to build up a better network. It was pretty revolutionary to our way of thinking. It's very no faff. So they don't let you waste time on things that aren't going to accelerate your business. It's very to the point.

So you're based in London but you moved over to San Fran?

Yeah, we were in San Fran for three months this year, January through March but we now operate the company out of the UK. We started in the UK and our cofounders live here as well.

At the end of YC did you manage to raise additional money?

Yeah. So that's again one of the big advantages of YC. They create a pretty fantastic ecosystem for getting funding into your business. We ended up raising $1.1 million which we are now using to grow the team and get more clients. We’re hiring more developers, salespeople and attending more trade shows and events.

What did investors think on the privacy concerns? What made you not track faces?

So we don't actually don't need to track faces. My cofounder, Dan, did his phd in computer vision trying to pick up features about people like age and gender without needing to use their face. We use everything else the system can see like hair color, size and clothing type, or if they're carrying a handbag, what kind of shoes they're wearing, they way they're walking. Anything really.

The other advantage of our system is that we can use any camera. Actually most cameras are set up so that people are turned away from them. But even when people are turned away from the camera, we can still capture demographics. So when they're looking at products or they're talking to a member of staf, we can still capture the demographics because we don't need that facial recognition.

Amazon is doing something similar where they track people in their stores and automatically charge customers. Is that something you're looking into?

That works really well for convenience stores, but there's so many other types of products that we buy where it wont work. For instance, if you're going to buy a sofa, you're not just going to be able to pick it up and walk out with it. Or many other products like that, you still need a store, you need some interaction with staff. It does work great for groceries and it's another reason why we're not targeting supermarkets right now. We went into one of those stores in San Fran and saw they have a huge number of cameras. I don't know how the unit economics work out right now, but there's quite a big hardware requirement.

What are the next steps in the development of your technology?

We recently deployed staff detection for a few clients. That's basically where can train our system to know what a member of staff looks like. So essentially it detects uniform, but if the staff don't wear a uniform, we can train the system to pick up something else distinctive. For example, they can wear lanyards or something that groups them together.

It's really useful for seeing where staff and customers spend time during the day. You can then exclude staff from your footfall accounts, which is actually quite a big problem for retailers. They're very reliant on footfall counts, but when the staff come in and out or they go out to lunch, it impacts the footfall counts and reduces the accuracy quite a lot. Once we've detected it and filter it out.

Awesome, are there any on other developments you can tell us about?

Yeah, we're moving to edge processing as well. So right now we upload the video to the cloud for processing and then delete the it which adds a bit of extra latency to the step. It means it's difficult for us to work in low bandwidth environments. What we're moving to is a processing step on the edge so we can work with hundreds of cameras on the same site. That'll be really, really key for us.

So how long does it take to process the data currently? Say trading closed at five for a store, when would they see the data?

Right now they'd get it the next morning. With this edge processing though, it would be real time. We haven't noticed too many issues with the delay as it stands but obviously we want to get that down.

For running your business are there any apps that you find particularly useful? Are there any email providers or CRMs you use that other people might also find useful?

We're going to be quite boring and talk about slack and G-mail. We've just started using notion, it is a kind of wiki-come-CRM which is quite cool. We use that a lot for note taking and it's really helpful for onboarding new team members. We have a source of information for all things about the company. So when people start, we get them to read through the information we have on that.

Google hangouts is also really key for us when we're talking to clients. It's probably the best platform we've come across for video conferencing and screen sharing. So when we're doing a demo of the platform to a client it works really well. That's a huge enabler for us working across the UK and US.

Yeah. Be clear and concise and have an idea of what it is you're trying to get to and the steps that you need to get there. Then just try and cut out all of the stuff you're doing that isn't helping you to get there. Be really really focused. You always have a priority list, just ruthlessly prioritize and ensure only the very most important stuff gets done. There's so many things to do when running a business so anything you can cut out that isn't helping it's going to be really helpful.