I was actually publishing artwork from television commercials to create the first ever animation art lines for Coca-Cola, Anheuser-Busch, M&M/Mars, etc. Trust me, there were no rubber ducks on my radar as I had absolutely no expertise in how to create these things! But as John Lennon so aptly said, “life is what happens when you’re busy making other plans.” So one night, at a party, a friend, with perhaps a bit too much to drink, had this funny idea of making rubber ducks that looked like celebrities. I do believe that 99.9% of people would have thought that idea would be impossible to pull off. 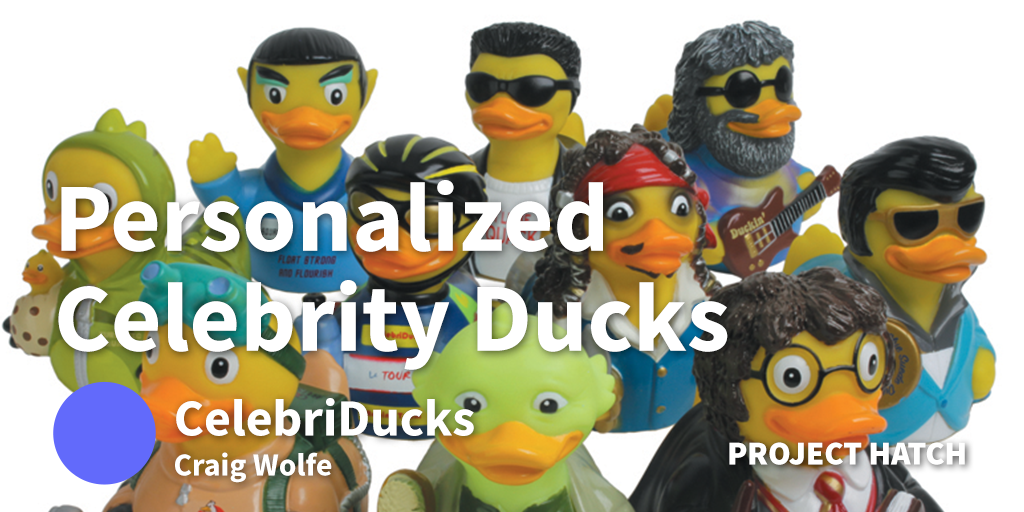 I was actually publishing artwork from television commercials to create the first ever animation art lines for Coca-Cola, Anheuser-Busch, M&M/Mars, etc. Trust me, there were no rubber ducks on my radar as I had absolutely no expertise in how to create these things! But as John Lennon so aptly said, “life is what happens when you’re busy making other plans.” So one night, at a party, a friend, with perhaps a bit too much to drink, had this funny idea of making rubber ducks that looked like celebrities. I do believe that 99.9% of people would have thought that idea would be impossible to pull off.

But for some reason, I thought it was funny and in my mind, I could envision it working! I called King Features and tried to get the rights to Betty Boop to start the new venture. I still remember the conversation with the head of licensing for North America, who I think could not get me off the phone quick enough. She was at least kind enough to say that if I ever wished to make one and send it to her, she would be happy to look at it. I am sure she thought she would never hear from me again! But somehow I found someone to make me a prototype overseas and sent it to her. I came in the office one day and there is a message saying, “we got your little duck, it’s very cute...let’s talk.” And CelebriDucks was born!

You have to understand, it took time for this to really get going. I would just plug away and send out my little press releases all day long. One day a reporter from The Atlantic City Press in New Jersey called me and asked me why they should do a story about us. I thought about it for a second and then just told her that, well, I was from New Jersey, and I used to go to Atlantic City. And amazingly, the reporter said that was good enough.

That weekend, the Vice-president of the Philadelphia 76ers saw the article and they were always looking for new and cutting edge promotions. So they called me and wanted to do a promotion with their superstar, Allen Iverson. They wondered if we could capture all his intricate tattoos and I assured them we could (but truthfully, I was a bit concerned as they were so elaborate). So they flew out and we met with them and as they say, the rest is history. The give-a-way was a huge hit and suddenly we were getting calls from all these other teams and companies like The New York Yankees, The Chicago Cubs, Gorton Seafood etc. It was like we had a brand new company virtually overnight.

I really didn’t want to run two companies, so I made the decision to sell off the animation biz and became all ducks and never looked back. We continually refined the concept every so often as with any property, from Mickey Mouse to Apple computers, they are constantly changing and refining their concept.

Our first ducks were a bit too big, too hard, and did not float well. My dear friend who creates these with me told me that if we had been friends when the company began, and she saw those first ducks, she would have advised me against starting this business altogether! That being said, we kept working to change all that.

After 17 years or so, we hit on a whole new concept and our Costume Quacker line was born which totally changed the company once again. Now we were tweaking the concept from a more human and duck hybrid to a classic yellow duck that gave you the feeling of these characters. Once we moved to this new parody line, we also came up with funny quirky names to go along with the new styles such as GooseBusters, Spa Wars, The GodFeather, Sargent Peepers Lonely Hot Tub Band, etc. It exploded for us and we never looked back. In three years, we did 50 of them which was crazy and there are always new styles that we are working on.

So many of these sell out of every store we put them in such as Harry Ponder, Ziggy StarDuck, Paddle like it’s 199, and yes, The “Donald” Duck...who knew!

The nice thing about our line is that people of all ages love them...….I mean from Duck the Magic Dragon to GameBirds of Thrones, it is a wide audience. But I do feel that Baby Boomers are definitely one of our top demographics for our product. We put our phone number in big letters on the top of every page. We actually love speaking to our customers and if we’re busy, we’ll always call them back. I think one of the more unusual customer service questions was if we could do a duck of Warren Buffett. The person calling was Warren’s sister!

You know, in the early days, I would never try and support myself just selling celebrity rubber ducks. It was too new a concept and I realized that it would take time to get ingrained into the culture. Fortunately, I had my animation business that was doing quite well, so I could run CelebriDucks as a fun side project.

My business model is very very unusual. Somehow we have become known as the the top custom duck manufacturer in the world doing them for everyone from Harley-Davidson to Conan O’Brien to SeaWorld. Plus our ducks are unequalled in their detail and design. But the funny thing is I outsource virtually everything, manufacturing, art department, distribution, etc…..I work from home looking out over the lake all day long...love it. What makes it work is having an amazing group of people who I work with all over the world. If you have good communication and organizational skills, a phone, and a laptop, it is amazing what you can do these days. So in a sense, you can say it is a one person company as I own it all 100%. But I do realize that one day need to smoothly transition it to another entity to take it to the next level.

You run a business, things will always go wrong, you can’t avoid it. You can’t control everything. But you can control your mind set and how you look at and deal with adversity and use it as a way to grow stronger. Also, it’s so important in the early days to really be lean and mean. I always tell people, it’s not how much money you make, it’s how much you keep. And you really want to bullet proof you niche. Make the barrier of entry difficult. Someone can always make something cheaper, but quality is the hardest thing to knock off.

Would you ever take investment?

I have no doubt that bringing in investors, going on Shark Tank, etc. would grow the business immensely. But for me it’s a bit different. I am happy to make a good living and have a business that I can totally control and have fun with. One day I trust someone will come along, make an offer, and I will ideally find someone who can carry our vision into the future.

When I wanted to bring a division of the business back to the USA, I could do that, i didn’t have investors telling me I was not maximizing shareholder value. The rubber duck was invented in America before the whole industry went overseas. I was already the only one doing all our artwork and sculpting here. Now I make our PVC free Good Ducks 100% in the USA and they are considered the safest rubber ducks in the world for babies to teeth on. I would do final production on our whole line here, but our ducks are too detailed, too complex. They just cannot do the very detailed one here cost effectively, it’s very sad.

How do you market your ducks?

We pretty much run on PR here. We don’t advertise or spend money on big social media campaigns. But I do feel that Instagram and Facebook are good vehicles for getting your business out there. And if you can create a cool Utube video go for it! We are a pretty simple company in terms of our business model and it’s amazing what a good website and ongoing social media presence can do for you these days.

What is the end goal?

For me, it’s all about having fun and creating wealth that you can use to do good in the world. Money in and of itself is never going to ultimately satisfy anyone or create a fulfilling life. It’s what you do with your money that makes one’s life meaningful. I love my ducks. But I am also working on music and book projects that I would love to devote more time to. Maybe once I sell the business, I can devote more time to that. There’s just so much I still hope I have time to accomplish.

Right now, we have all these new styles of ducks that I cannot wait to bring to life, the possibilities are endless. Bohmenian Quacksody is going to be a huge hit for us as is Quackodile Rock. They arrive in early November with The Queen of Soak. Then in December, we hope to have our Born to Sun, Turn Quack Time, RB Gins-Bird, and The Pinball Gizzard.

There are pics of all of them in the Costume Quacker section of our website. In five years, if we continue at this pace, we will probably have at least another 50 new styles. But if we get acquired, it will be a lot more than that. We have sold millions of ducks and have been fortunate to have made millions of dollars over the years. Our biggest goals for the future is how to transition the business to the next custodians and also how to use these monies wisely to help others. I never expected to accomplish what I have thus far, so I have faith things will continue to work out for the best….guess we shall see!