How to Start a Head Shop Worth $13m

Smoke Cartel was founded in 2012 by two Savannah College of Art and Design students, one majoring in Service Design and the other studying Advertising. Darby Cox and Sean Geng were frustrated by how difficult it was to purchase and the lack of quality of smoking accessories.

Determined to rise above the haze and with $600 between them they launched. Over the next few years, Smoke Cartel became the go-to name in the head shop market. Darby has gone on to become the first woman in the US to be appointed as CEO of a publicly-traded cannabis company and the company has earned a market cap of $13m. 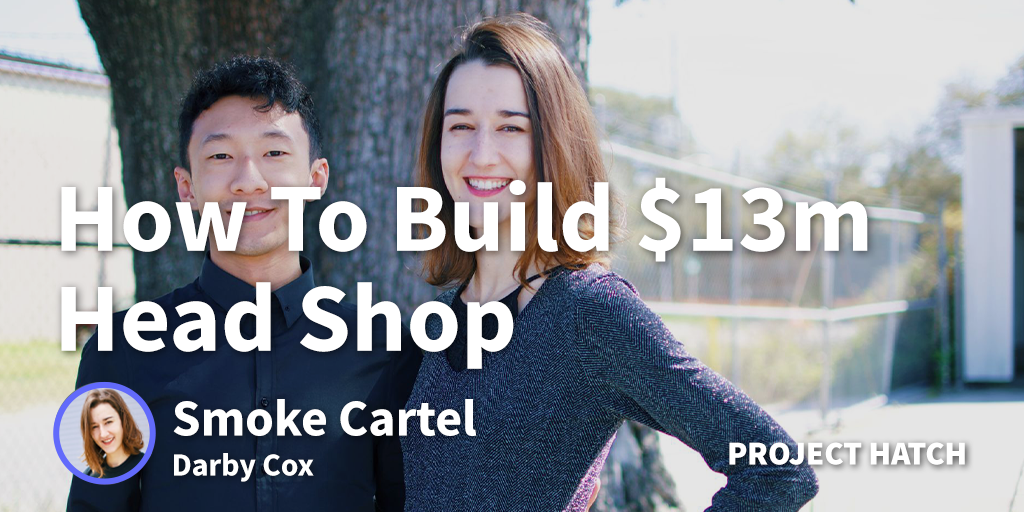 Hi Darby. Who are you and how did you decide you wanted to create an online head shop?

In my early 20s, I began using cannabis to treat an intestinal disorder and found tremendous relief. I was hesitant when my partner, Sean Geng, decided to launch an e-commerce shop for smoking accessories from our living room in 2013. But when we attended our first trade show and I saw how many people were being helped like I was, I was all in.

Before helping to found Smoke Cartel, I was a student at the Savannah College of Art and Design and in 2014 I started a small terrarium company called SproutSouth (SS).

Once Smoke Cartel got rolling, I knew that had to be the focus. It required so much of my time and attention that it would a disservice to allow SS to just sort of wither over to the side. It's important to me to give things 100%.

How did you come up with the idea? Was it a gradual process or lightbulb moment?

It was much more of a ‘lightbulb’ moment. Going to that first trade show really awoke me to the power of what is possible in this industry. I ​saw what it was doing for medical patients, and that changed my mind completely. We were so young then, too young to even book hotels, we needed fake ID's. Up until that point I was definitely no expert outside of my own personal use. I’ve learned everything along the way. Once the ball started rolling faster and faster, and I decided to focus on the business was the best use of my time.

How did you initially fund the idea?

The business was founded with just a $600 investment from my partner and I. Sean and I met while we were both studying at SCAD, Savannah College of Art and Design. I was a Service Design major and he was studying Advertising.

My biggest hiring tip is, don't hire you friends, don’t ask your friends for references.

How did you market the company initially?

We primarily used reddit for early marketing. We were successful by being authentic and doing AMAs. We arrived at this because we couldn’t do the traditional social media marketing.

What are the biggest challenges you've faced?

Early on our biggest challenges were the barriers of social media. Traditional companies are able to rely on social media to grow their businesses so we had to get really creative to grow our brand and name. Nowadays, the challenges we face are on the public markets side. Understanding all the compliance laws has been challenging, and we are still learning exactly what we can and cannot say about the process. Accountability is so super tight now. We’ve lost a little bit of that crazy, startup excitement and traded up for structure and procedures that feel a bit more corporate – and it feels great. It’s allowed us to view our growth differently and opened us to possibilities we previously hadn’t seen.

Do you research, it’s a lot more cost intensive than it was 5 years ago and the laws are laws are always changing, just because it’s popular doesn’t mean it’s legal.

What apps can you not live without?

The top apps we can’t live without are all internally built - Data Den, the Warely Suite, and our AI search.

Data Den is Shopify add-on that is designed to give Shopify entrepreneurs peace of mind and minimize potential downtime. Key functions include accurately maintaining up-to-date copies of store data and event, exporting detailed data faster than traditional Shopify exports in CSV, Excel, and more, data recovery and rollbacks, and so much more!

We were unsatisfied with the programs out there, they had no long term solutions and were not thinking through how it would interface with the business. We knew we needed an in house solution. Our development team worked long and hard hours but we’ve come out with something that is smart, accurate, customizable.

We always see an increase in search traffic as new place legalize or decriminalize. We are very excited to help those in the older silver dabbler category.

What are your family’s views on the industry? What did they think when you were getting started?

Right now they could not be prouder, but it definitely took many years of convincing and for them to see the full value of the work we do.