How We Created Shark Tank's 5th Best-Selling Product Ever

Michael was going through a divorce, and staying at my house. One morning he was walking through the living room when he saw my 7-year-old son, Saxon, sitting on the couch in one of my old hoodies. It was obviously huge on him, but he looked so warm and comfy that Michael turned to me and said, ‘Hey bro, you think they make those for adults?’ We then noticed a fluffy throw blanket on the couch behind Saxon and thought ‘Why don’t we make them out of that,’ and The Comfy was born! 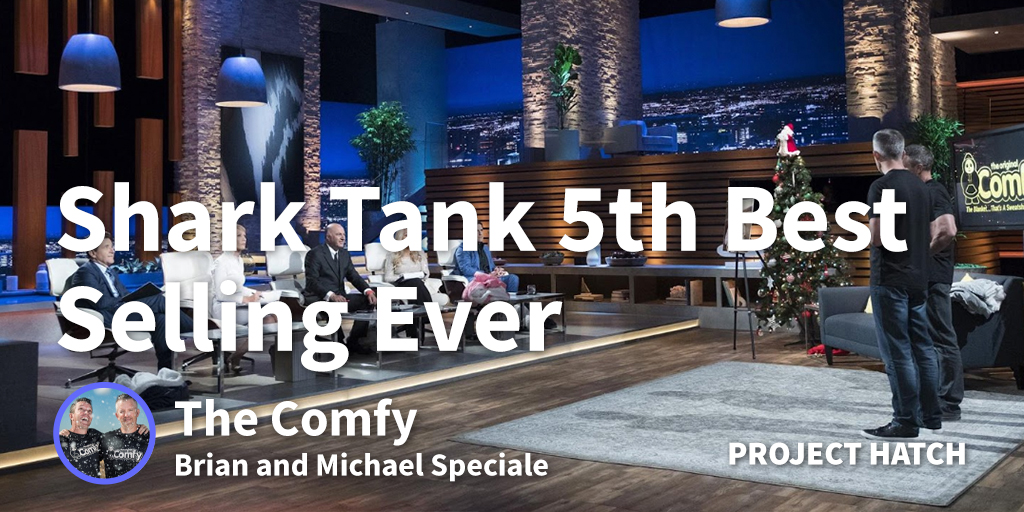 There’s a lesson in that moment we hope other entrepreneurs can be inspired by: the power of taking action. That was the point where most would-be inventors get stuck. Instead of talking ourselves out of this crazy idea, we went for it. Boy, are we glad we did!

What’s crazy is we went from having the idea to standing on the set of Shark Tank in six months. It was an insane journey, and probably best that we were total novices when it came to this kind of business. We both have entrepreneurial backgrounds—Michael was running a pool business and Brian a TV production company before The Comfy—but there was little that could have prepared us for what we were in for. How the heck were a couple of single dads from the desert going to make a big blanket/sweatshirt thingy and sell it to the masses? We thought Shark Tank was our best bet, so we came up with a pitch (and a song!), flew to Denver to audition, and made it through several months of vetting before we found ourselves in LA.

Our appearance on Shark Tank was surreal. (See our pitch here.) Fortunately, Barbara Corcoran bought into our concept and invested $50,000 in exchange for 30% of the business. Already, it’s proven to be her most savvy investment yet: The Comfy was just ranked as 5th best-selling Shark Tank product in history (See USA Today rankings here), and we haven’t even been at it two years!

But while Shark Tank has been great for business, it’s certainly not the be-all-end-all. The bump in sales you get on the night of your airing is significant, but it dies out fairly quickly. It’s funny, because about a month after our airing, we went crazy viral all over social media, to the tune of more than 100 million video views. That had nothing to do with Shark Tank. It had everything to do with big Facebook pages picking up a fun video we did demonstrating The Comfy, and spreading it around the world. In the span of ten days we had sold into more than 70 countries, and were backordered for more than five months. The power of social media is very, very real.

Our target demographic? Anyone and everyone! The Comfy is truly a product for everyone—men, women, & children. We often call it the “perfect product” because it is one-size-fits-all and puts a smile on the face of anyone who tries it. The same product fits a child (kids LOVE it!) and a heavier adult. What could be better?

We funded this 100% ourselves. Well, kind of. We did each borrow $50,000 from our parents; without their support, this never would have gotten off the ground. We’re so grateful.

What really skyrocketed our growth was our decision to go against the advice the Sharks (and Barb) had given us: ‘Stay out of retail!’ The problem with that advice was we’re both big Costco guys, and we couldn’t stop thinking of how successful The Comfy could be there. So Barb connected us with Melinda, a sales rep she’s used for years to get her Shark Tank companies into retail. Remember, we just wanted Costco. But before we knew it, we were on QVC and in Bed Bath & Beyond, Target, Kohl’s...you name it. Our heads were spinning. What’s funny is Costco initially said no, but we managed to get a test run with them late last year, sold out, and they’re in with us in a big way this year.

So I guess the best piece of advice here is to find a tenacious salesperson, which is what we had in Melinda. She also came with built-in infrastructure and a team to support our rapid growth, which is why we essentially gave her the keys to the business and told her to run with it. That more than anything else is why we’ve grown so quickly, and with relatively few hiccups along the way.

What lessons have you learned that might help someone starting out?

The biggest lesson I think anyone can learn from us is the power of taking action. Having an idea is great—but it’s meaningless unless you do something about it. We had absolutely no experience with this kind of business, but we didn’t want to be left wondering “What if?” Coulda, woulda, shoulda...didn’t. That wasn’t going to be us. Sure, it’s easy to say now, but that’s the one thing we want fellow entrepreneurs to take from our story. Go for it. You’ll be glad you did. (Though a good idea definitely helps!)

We have numerous trademarks and, yes, patents, and we spend a lot of money defending them from the dozens of Comfy knockoffs out there.

It’s funny, because the only reason we initially applied to patent our product was so we could say we were patent-pending when we were inevitably asked about it on Shark Tank. Our patent attorney, Tom Galvani, thought we were nuts. “I don’t like your chances of getting this patented, guys,” he glumly warned us.

But we were resolute, and Tom did a fantastic job. Two years later, we have both design and utility patents, with many more in the queue. Don’t tell us something can’t be done. Oh, and being asked about it on Shark Tank? It never even came up! Ha!”

What apps could your business not run without?

We could not have gotten by without Shopify. What a platform. It never came close to crashing with the crush of Shark Tank traffic, and it allowed us to scale our business very quickly. It’s amazing that little mom-and-pop ecommerce sites have access to the same tools as $100 million+ businesses. Your only limitation is you!

We are always coming up with new products. What started with the Original Comfy has now evolved into the Comfy Lite, the Comfy Hoodie, a Kid Comfy, prints, holiday versions...you name it. Our pipeline is rich with concepts, and it takes a lot of restraint not to want to put it all out at once. But we’ll be patient. We feel like we’re creating an entirely new category, kind of like Lululemon did with AthLeisure. We have a product that makes people happy, and makes the world a little bit better. What could be better than that?

As far as revenue, we did $20 million in 2018 (our first full year), and will do north of $50 million in 2019. That’s pretty ridiculous growth, and maintaining it will likely mean some sleepless nights ahead. We don’t have any plans to sell right now, but that certainly could be our endgame. We don’t think there’s any reason we can’t be a $250-$500 million (or more) company five years from now. Why not? We’re just getting started, and you know what will never go out of style? Being...Comfy.