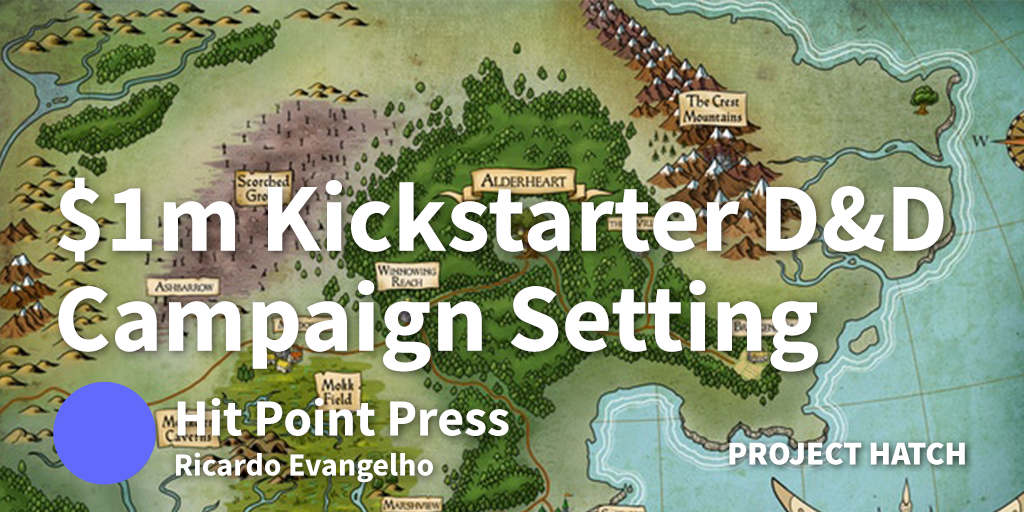 How does it work with Dungeons and Dragons?

Humblewood is a world in which you get to play as birdfolk and other forest animals instead of the usual human, elf, and dwarf races.

Humblewood was made to be compatible with the 5th edition. Wizards of the Coast released an Open Gaming License (OGL) which allows creators like us to build within a defined scope. As a result, we can use the specified subset of 5th edition rules to create our campaign setting.

You launched Humblewood on Kickstarter. How did you get so many pledges?

We’d been building the Humblewood community for almost a year before launching the Kickstarter. We previewed the campaign using teaser images and a free early playtest document. Additionally, we have garnered experience through previous successful Kickstarters. We invest in our community and because of that, we are lucky to have a group of people that have backed us on multiple projects.

Our backers also enjoy how collaborative the Humblewood project is. We have a Discord channel that is quite active. We use the Discord to listen to community feedback and share previews of some of the content we’re building.

Additionally, we work with 30+ artists - the artists are very engaged with the work and have been invaluable in the development of the visual language for Humblewood. We are so lucky to have such a strong artist team who are excited about the project. The Humblewood team actually found a lot of our artists through their social media or creator channels so it is extremely rewarding to have them, in turn, post and share their Humblewood work with their fans.

What other forms of marketing do you use?

Towards the end of the campaign I saw you made $150k in a single day and the total campaign reached over $1 million. How did you manage that?!

Again, really, this goes back to our amazing community. Getting a $150k in one day was in large part because of community members and content creators supporting us. The Humblewood Kickstarter reaching over a million dollars was all thanks to them. We had a sizable group right there with us on the Discord chat, cheering the campaign on.

Updating the stretch goals on the fly was also a big help in getting the campaign to $1 million. I think promising that we would immediately begin work on a follow up to Humblewood if we hit $1 million dollars helped. Some existing backers told us the commitment to a Humblewood sequel motivated them to increase their pledge to the $300 tier.

It was an emotional day for us. We spent every second we could communicating with the community. I will admit though, a last minute advertising push didn’t hurt.

How did you push the average pledge value up?

It is going to sound like a broken record but it comes down to understanding and listening to what your community wants. We don’t design the campaign, launch it, and forget it. The team continued to engage with our backers and regularly update what we offered at the different tiers based on the feedback.

Furthermore, we offered a limited edition box set at $100 that was only available through the Kickstarter. The box set included the contents of the base box set, but had an alternate foil cover for both the box and book. Collectors especially like the exclusivity of items like these.

Finally, we had a $300 tier that included everything that the campaign was offering.

You received a lot more pledges for the Humblewood campaign than your earlier Kickstarters - What lessons did you learn from your earlier campaigns?

Our other Kickstarter campaigns helped us get our sea legs and helped us deliver a solid Humblewood campaign for our backers. In a previous campaign, we didn’t properly account for shipping rates. During the fulfillment of another campaign there was an unannounced customs inspection and so we learned to incorporate surprises like this into our timelines. The other campaigns, each increasing in size, helped us work out logistical kinks, and therefore, when we had a campaign as successful as Humblewood, we were seasoned. Even on Humblewood, there were some new lessons learned. Every Kickstarter is definitely a learning experience!

Did you actually make a profit on that first campaign?

This may sound a little strange but we don’t expect to make a profit on our Kickstarter campaigns. We use them to raise funds for the production. We think of it a little more like a pre-order. The campaign for Humblewood raised over $1 million but most of that was already allocated for the production of books, miniatures, art, writing, and the additional commitments unlocked through stretchgoals.

We usually recover and, if we are careful, make profit afterwards with our post campaign sales.

You almost use Kickstarter like a launch pad then?

Exactly! The Kickstarter helps us pay for the initial production. When the campaign ends, we typically try to purchase enough inventory to cover double the amount of orders we’ve received. That way we have some product to sell after the campaign.

How do you go about building a game and testing that people will actually want to play it?

We knew Humblewood was a significant undertaking and it’s why we offered a free playtest through our website six months prior to launch. We thought Humblewood was special, but needed to know if this was something people wanted.

Every time we updated the playtest, everyone got sent the new version as a free update. Overall we released five different versions of the playtest, which were downloaded over 20,000 times.

Providing these playtests allowed us to build a community, as well as get good, constructive, feedback from them about what was and what wasn't working.

What is it that tips the balance? What would make you say we're going to dismiss this idea? And have you dismissed an idea in the past?

Usually ideas get dismissed before we even start sharing them with the public. We do a lot of behind the scenes research and prototyping, only putting an idea out to our community if we feel confident about it.

We've had many projects where we'd start, talk, create prototypes, and then discontinue the project entirely. There are even projects we haven’t taken the first steps with and are sitting on a list of “things to explore.”

It’s been a few months since the Humblewood campaign finished. Have you shipped? How are post-campaign sales?

For the base book and box set, we're still on track for our projected goal of October. Right now we're preparing the final assets and getting them sent out to the printers. After that, our miniatures will be ready for November.

Post campaign sales have been encouraging and we anticipate that during the holiday season will be really busy. After backers have gotten their rewards we will be refocusing on post-campaign sales. Going to PAX Unplugged this December is part of this refocus and will give us the opportunity to get a sense of how the community is receiving Humblewood.

We actually have about ten other projects on the run at present, not all of them related to Humblewood.

At the same time we have others exploring new concepts and building ideas for future projects.

How did you break into the industry?

I started Hit Point Press (previously Cardamajigs) as a company that focused on M:tG. I began by selling my own designs as tokens and giving them away free as a downloadable printable PDF.

I had another full time job when I started Cardamajigs, so as sales started to pick up I brought in someone to help with fulfillment. Being an avid D&D player, he suggested that we use the newly released OGL to create reference cards. His thoughts were, even if the project didn’t succeed, at worst, he would have reference cards for his own campaigns.

To gauge interest, in-house, we printed 500 test sets and mailed them to interested players around the world. That helped us understand who our audience was and enabled us to see if the reference cards were something players would use.

How do the unofficial Magic: the Gathering tokens sell now? How is that part of the business doing relative to Dungeons and Dragons?

Comparatively, the tokens are now a fraction of the business. Most of our team is now focused on the 5th edition content we're building. That being said, given my love for the game, I don’t think the M:tG side of the business will ever go away.

You're based in Canada, I guess you sell a lot to the U.S. and nationally within Canada. Where are your other markets?

Eighty percent of our market is the U.S, eight percent is in Canada, four percent is in the U.K, two percent in Australia, and it dilutes from there.

Day to day, what apps do you find useful running the business?

For communication we use Discord which allows us to talk with our community and internally with our team and collaborators.

For building, we use Adobe Suite. Without it, we couldn't build our projects.

For e-commerce we love Shopify, it's a great sales platform we use for all of our sites. Plus, it’s Canadian!

For project management we use Teamwork. This software helps us organize the many projects we're building simultaneously and keep in contact with our remote team members.

Are you looking into launching into any other games apart from Magic: the Gathering and Dungeons and Dragons?

There's always new games coming out. It's a matter of finding where we fit in with the game’s community.

Right now, the market we're in aligns with our vision so we want to keep expanding our existing offerings.

My final question, would you ever sell the company or is it a project you really love?

I am really in love with the work I do. Hit Point Press is 100% passion for me. Loving my work is important to me and I believe it shows in what I make. So, at the moment, I couldn’t dream of selling Hit Point Press. I am too excited about what we are doing, about our community, and I wake up everyday reinvigorated because I have the opportunity to build new things.