How We Created A Company That Financially Rewards Minimal Smartphone Use

About 4 years ago my cofounder Justin traveled to Santiago de Chile on an exchange program to learn Spanish. While there, his classmates created a mobile application called Pocket Points which rewards university students for not touching their cell phone. Upon returning to the United States, Justin contacted them with the intention of helping him to expand the concept in the South American market, and they never answered… 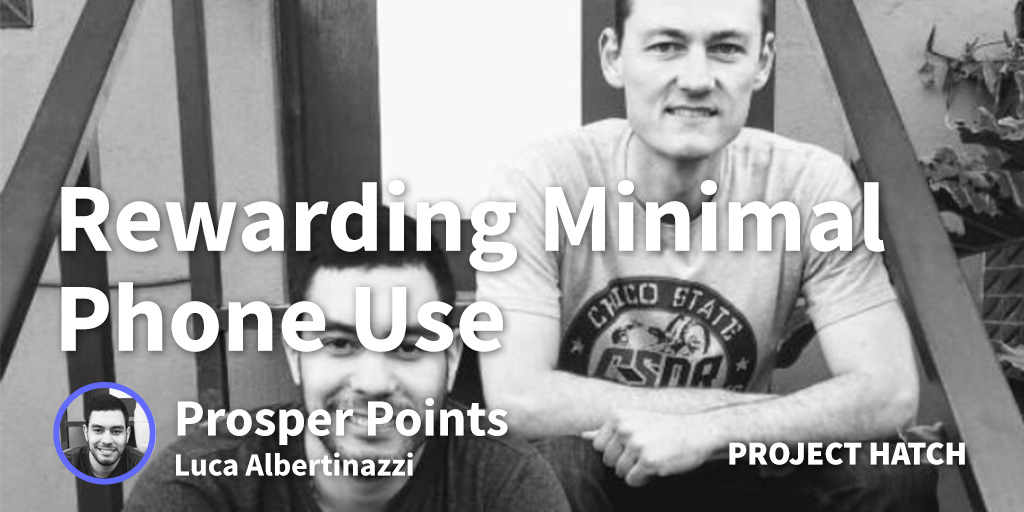 Justin decided to take advantage of the concept and refine it to the needs of locals in Santiago de Chile. He wanted to validate Prosper Points before scaling it into larger markets. When he became more confident, he quit his job and invited me to to help on the adventure of rewarding people for not using their smartphone.

Justin started approaching universities in Santiago, Chile, where he made several surveys and had conversations with professors and students. With the information collected he had an initial idea of ​​which commercial targets should be included to the marketplace. With this he knocked on more than 70 doors where he managed to get 30 potential customers in one month willing to be in the marketplace for the rewards.

This gave him confidence to call me, and I went from Argentina to Santiago de Chile to help with validations. The construction of the prototype called Atrapuntos began and at the same time we continued knocking on doors to add more customers in our catalog. By the time the prototype was ready, there were already 40 local Chilean businesses waiting for it.

With the prototype ready, a launch date was set and we decided to go in person to all possible universities to get downloads. No universities gave us permission to validate the idea, so we chose to infiltrate the campuses, act like students, spread the word and get downloads. 15 days of this strategy led us to 700 downloads of the prototype and more than 30 redemptions of electronic coupons. In the process we were expelled from the San Sebastián University. They called security and the police. All we wanted was to help the students improve their concentration in class. With this we managed to raise our first USD 20,000 to build an MVP and continue validating.

How did you get your first three downloads?

At first Justin began to validate the concept of a voluntary solution to the problem of cell phone use in the classroom in the streets. After these initial tests, we built a prototype and went to all universities in person. The universities did not give them permission to validate, however they allowed us permission to talk to the students and ask them to download the app. In less than 15 days doing this, we got approximately 700 downloads and more than 30 electronic coupons redemptions with our 30 businesses available in the marketplace.

Did you have any experience in the area?

I previously founded a technology company called Frontino Interactive that, through development and marketing projects, financed my main project which was a mobile game called Galaxy Guardian.

We have raised USD 43,000 from our angel investor and we received approximately USD 10,000 in family donations. Additionally the Chilean government, through its entrepreneurship programs, has provided us with USD 15,000. We are currently looking for a $ 250,000 seed round.

Where did you and Justin meet? ‍

Justin Fodor began his validation process in May 2017 and was on the hunt for a co-founder. On the Meet Up app he met a man called Ivareg Villalta, who recommended contacting me. He knew I had experience in the world of mobile apps and that I was looking for an adventure to undertake in Latin America . Justin contacted me via LinkedIn and started conversations until he felt confident enough to quit his job and devote himself full-time. He then asked me to move to Santiago de Chile to help him in the adventure of fighting cell phone and social media addiction.

It is important to look for people who complement the parts that you do not have within your founding team. That means, if you have a strong sales team, you should make an effort to contact more creative people with different personality types (always aligned with the concept and have a passion for the idea, as well as the problem to be solved).

I always recommend putting periods of proof, so that both parties can determine whether it’s worth working together.

It is important to look for people who have a lot of passion for the problem you are solving. Only then can the whole team together get ahead and be successful.

Finally, do not accept bad people, arrogant people or toxic people regardless of how skilled they are. Being an entrepreneur is a special mindset, so collaborating, helping, being generous, humble and providing value is key.

I founded a technology company called Frontino Interactive, with a team of 4 people. This company was dedicated to making mobile applications and we did marketing work for other companies. With this we financed and created a game called Galaxy Guardian. This company got an opportunity for investment and acquisition by a public Venezuelan company, operation that was rejected by the team due to the corrupt resources of the dictators.

For Justin, the possibility of helping people to wake up from cell phone addiction, given that through his youth he observed how people were constantly paying more attention to cell phones instead of enjoying each moment to the fullest. His motivation was always that from this concept to help all people around the world to live a life full of genuine connections. Additionally, being an entrepreneur was his dream from a very young age.

For me, I escaped from Venezuela, a country in a state of dictatorship, and received this great opportunity from Justin. This has inspired me and made my motivation like an unstoppable fire to make this venture a reality. From a young age I felt that people were extremely addicted to social networks, so once this idea was presented to me, I had no doubt in taking it.

Additionally, while I was seeking financial support from my family to move to Santiago de Chile, I contacted my cousin who was working for Apple on the Austin Texas campus. I showed him the idea and he said "I have no money to support you, but a few months ago Tim Cook in a keynote in our campus literally told the public" If you want to be successful in this life, stay out of the cell phone as much time as possible. So make that idea the best opportunity of your life and don't give up.” This inspires us, especially on the difficult days.

First, if you are really an entrepreneur, the most difficult thing is to NOT start-up your idea. So if your only way of breathing is by making your idea a reality then you will do everything possible to carry it out.

Second, if you do not love the problem you are solving and the idea you are using to solve it - the path will be very difficult for you. Feeling inside your heart that you are doing the right thing, that you are bringing true value in society is key to having the energy to wake up 5am every morning, even on those days when everything is going terribly wrong.

Third, learn to listen, fall in love with losing, get used to not needing anything. That mentality will give you the strength to reach places that no one else can reach.

Fourth, money is oxygen, you should know how to manage all your resources and do your best with it. Do not spend money on silly things, every penny you have are minutes of life that you can give to your project to make it big.

Ultimately, time is not your most valuable asset. Time is the limit you have to feed your brain and make your dreams come true. Every second is key, move your ass without excuses.

Basically we are at an early stage startup and our MVP has already done its job in the market. That is why we are focused on generating revenue and getting a seed investment to accelerate the growth process.

What are the top apps your business could not run without?

We have 3 tools that are absolutely indispensable for us. First Hubspot CRM, improves efficiency and has helped us increase sales considerably. Additionally, we use Trello to keep the organization of tasks tidy. Slack is our main communication channel, it allows you to integrate with many platforms and at the same time you can maintain a professional communication without external invasion as happens in Whatsapp.

What are the next features for the app you're working on?

We are creating a platform for companies which will be a SaaS, for productivity. Since the cell phone is being used idly more than 8 hours a week during work hours, this could represent a loss of more than 2 million dollars per year for every 1,000 workers in companies. The objective is that in a voluntary and fun way, efficient use of the smartphone in the workspaces is encouraged. We are looking for our first clients in the United States and Chile.

Where do you see the company in 5 years?

We see it positioned in large markets such as India, United States, China, Australia. Genuinely creating the habit in people of non-use of the cell phone at the most important times of the day. This could reduce the use of cell phones and social networks on average 80 minutes per day, traffic accidents by 30%, increase the ability to concentrate in the classroom by 62% and reconnect people through genuine connections encouraged by our app.

In other words, to be big enough so Facebook can see us as a headache for them, since our goal is to bring back the lives of people who have been taken by these addictive platforms.