How We Got 8500 SaaS Signups by Syncing Smartphone Networks

Starting Cira Apps Ltd was a lightbulb idea, for sure, although I back-burnered it for years. It started on Sept 11th, 2001. I’d been helping companies deploy to the BlackBerry Enterprise Server. We had a couple of customers and one in particular lost their network infrastructure on that terrible day. Their data center lost power.

So suddenly these great wireless devices were useless. They could make phone calls, but they didn’t have any phone numbers. Texting wasn’t common then. They knew that at the time, there was a method to send a message from one BlackBerry to another using PIN messaging. 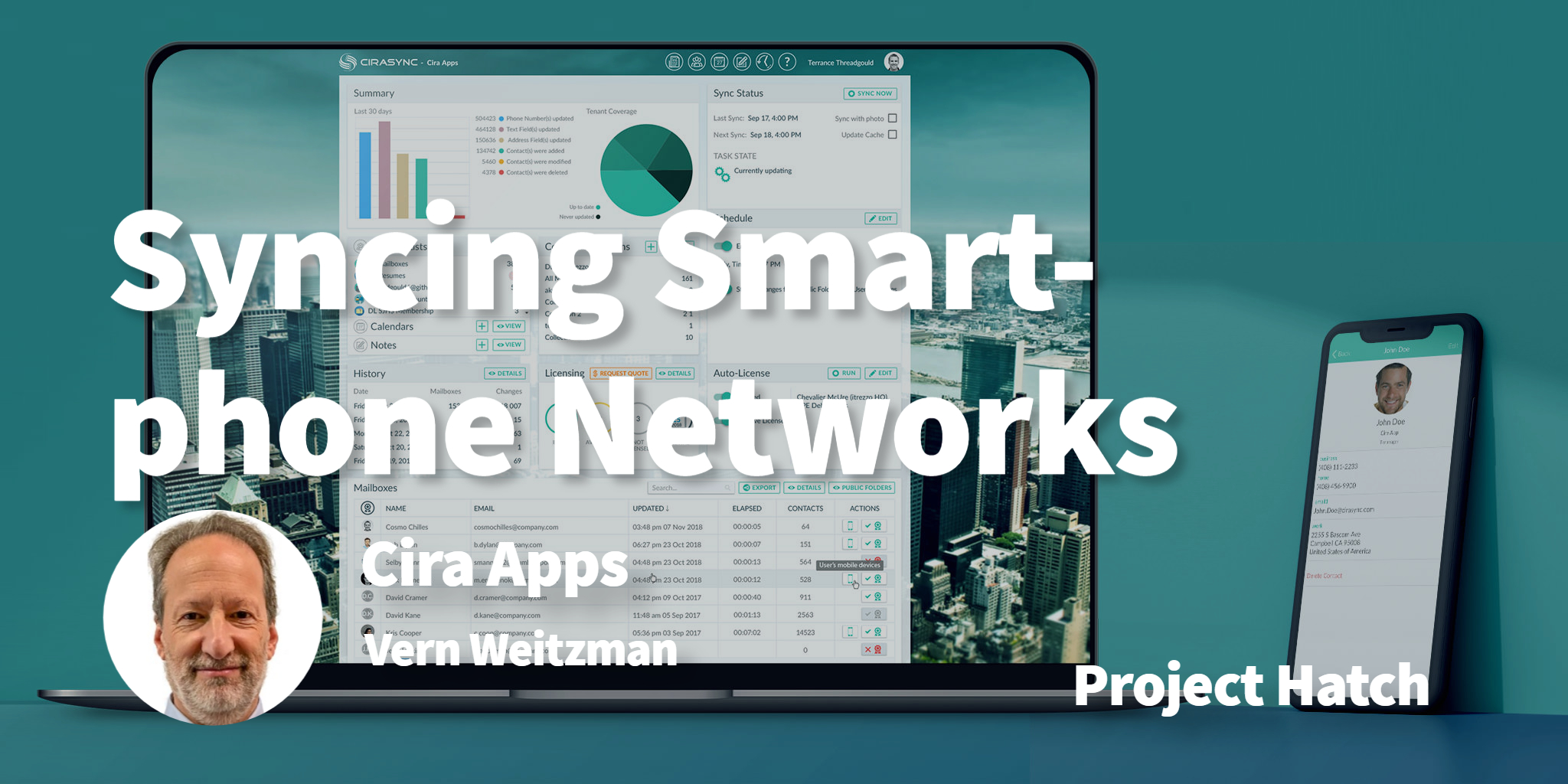 You had to take your co-worker’s 8-digit PIN, go to your address book on your BlackBerry and type the code, and then copy it into your contacts. The person receiving the message had to put your PIN into their contacts.

By automating these PIN updates in everyone’s address book, you could immediately communicate with your co-workers in an emergency -- no different than text messaging today. Automating contact updates for everyone in the organization provides a huge advantage even without emergencies — it facilitates day-to-day productivity. The ultimate solution is to automatically push entire contact lists and calendars to smart devices.

How did you get your first three customers?

Well, you try to build a product that consumers actually want. You test it, fail a lot and hope something great comes out of it. Then, you try not to blow your marketing budget. Word gets out. You scale up and make a pile of money. Anyway that’s the dream. It didn't happen that way for us. At least, not at the start. It took my company three years to get to our first 30 customers, representing about 25,000 users. That's not great.

As I tested and tested some more, trying to find a way out, we blew through time, money and some of my earliest employees, who realized there were greener pastures elsewhere in Silicon Valley.

Eventually, we found a way to live the dream.

Honestly, we had to get our heads out of our on-premise software and into the Azure cloud! When we launched our on-premise contact management software, it took five years to reach the first 30 customers. While that may seem pathetic (it is!), those 30 customers represented about 25,000 seats.

When we launched the second business, it was virtually the same type of application but it was SaaS-based and the contrast is insane. It took five weeks to acquire the first 30 customers.

In a way. In 2001, I started building server and handheld apps specifically for the Microsoft Exchange platform. The company, itrezzo, was a success - today it has more than 1,000 customers including HBO, the City of Austin, and the U.S. Department of Justice. Cira Apps came along when, in 2015, I saw some customers migrating from on-premise messaging to Microsoft Office 365. I remembered my old insight from the BlackBerry days, and decided to start building cloud-specific applications.

Any medium or large organization with a substantial network of employee smartphones. Our current customers include, for example, software companies, media and entertainment companies, sports teams, water and power utilities, large construction companies like Skender, large plumbing and HVAC concerns, government organizations, and conservation non-profits like the Alberta Conservation Association.

What is the funniest/most strange customer request you’ve had?

We had this cranky IT head of a European construction company who would do almost anything to avoid filling out a purchase order. So rather than on board everyone through the cloud, which would have resulted in a small amount of paperwork for him, this guy went desk to desk… over 500 employees… installing the software on each one by hand! Eventually he crashed his own Global Address List - we hadn’t prepared for such an odd eventuality!

Organically. We self-funded right from the beginning and didn’t need to look to outside sources.

Where did you meet your cofounder/ founding team?

We are in Silicon Valley and have been pretty fortunate in the matter of hiring, although it’s always very competitive around here when you’re looking for talent. And of course it’s much much trickier today, even compared with three or five years ago.

In finding first employees, look for self-starters - and also, people who have skills and experience that you do not have.

I started working for BlackBerry in 1999, helping deploy thousands of handheld devices. Working at the heart of cutting edge-mobility, I acquired a foundation of tech and user knowledge that I have used when developing new software products. It also helped me spot a market opportunity, for server and handheld app solutions, specifically for the Microsoft Exchange platform.

In 2001, I founded itrezzo and ended up with a lot of terrific customers. I learned a lot from building that company and solution which prepared me for my next company. By the next decade, the market was changing, technology was maturing, and it was clear we had to pivot.

Existing customers began migrating from on-premise messaging to cloud-based Microsoft Office 365. I wish I could say that we moved faster, but I was initially skeptical about how many medium and large enterprises would migrate to the cloud. After exploring options and cloud technology, we decided to build cloud-specific applications for Office 365. We launched Cira Apps Ltd with its flagship SaaS solutionCiraSyncin April of 2016.

It was a natural evolution from hardware developer, to software developer, to tech team leader -- and then after 9/11, the critical need for our kind of solution became clear. I just enjoy coming up with a minimal viable product, getting something into beta and starting to get users on it.

From there, you just keep whacking moles until there are no more moles to whack. Finally, you get to production and hopefully can get people to pay for it. I just like the whole process.

To stay motivated, I’ve been going to Tony Robbins seminars. Things really clicked for me at a Business Mastery seminar I went to in Las Vegas. That whole track keeps me focused and involved in trying to improve both myself, and things that are important for the company.

One thing I’ve gotten out of the seminars is that as individuals, there are three types of identities. An artist, where you just like to create new stuff. You can be a leader, someone who wants to inspire and guide other people. Or an entrepreneur, who wants to make money. Of those three, I’m more of an artist. I like to focus on creating really cool software. As an example of putting this into practice, last year I hired a Chief Marketing Officer. It was a big financial decision, but it's been very helpful and productive. I spend only 5 percent of the time I used to spend on marketing, which has opened up time for what I really want to do, so I don;t burn out.

While looking forward, keep paying attention to the low-hanging fruit of improving efficiency within the company. And in terms of business, really pick your software development projects really carefully. Talk yourself out of certain projects or get others to talk you out of them, because the software graveyard has cost me hundreds of thousands of dollars.

What has driven the most sales?

Honestly, to keep customer focus, I write s ton if blog articles -- even knowing that many of my readers aren't customers. Having that library of useful posts will let your clients help themselves. What kinds of content works? Create how-to videos and blog content. Make it granular, with specific answers to specific questions. You want lots of rich, helpful content.

I also recommend making the "contact us" page on your support site as easy to use as possible (some companies hide it -- social media websites are good examples of this strange practice). And when customers do reach out, communicate with them ASAP. Do all of these things, and they’ll love you to death.

Differentiation. We have a fairly niche offering -- a SaaS that helps enterprise companies to automatically sync up their Microsoft Office 365 contact lists and calendars to their phones. And I’d say we provide better education than most, to let clients self-service a lot of the time. We try to make our whole experience seamless from the beginning -- making the demo the onboarding, and the onboarding the demo. Our approach is frictionless.

What are the top 3-5 apps that CirsSync could not run without?

To actually run the business: QuickBooks Online. We use it, of course, for all accounting and finance. More importantly, our CiraSync back-end uses QuickBooks.

For example, if a customer wants a sales quote, the back end will send an API request to QuickBooks which generates and emails the quote. Even better, when a customer makes a purchase, our SaaS backend will create the invoice in QuickBooks, take the user’s credit card number, charge via Authorize.net, and then record the payment.

This also emails the invoice confirming payment. Last month, about 170 invoices were automatically sent via QuickBooks. Everyone in the company has a Microsoft Office 365 account with the full suite of desktop apps, Teams and email. Although Zoom, a video conferencing tool, and Slack are redundant features in Office 365, we still pay monthly for those too.

Where do you see the company in 5 years?

In 5 years, we’ll be the number-one SaaS solution provider in the USA for helping enterprise firms ensure their communications are 100 percent synchronized.

Would we ever sell?

Write a number down on a napkin and we’ll see!