The Party People was started by my mum Mala Salakas 30 years ago when she was “Patches” the clown. When she mother started the business, we were actually teased at school because our mum was a clown! 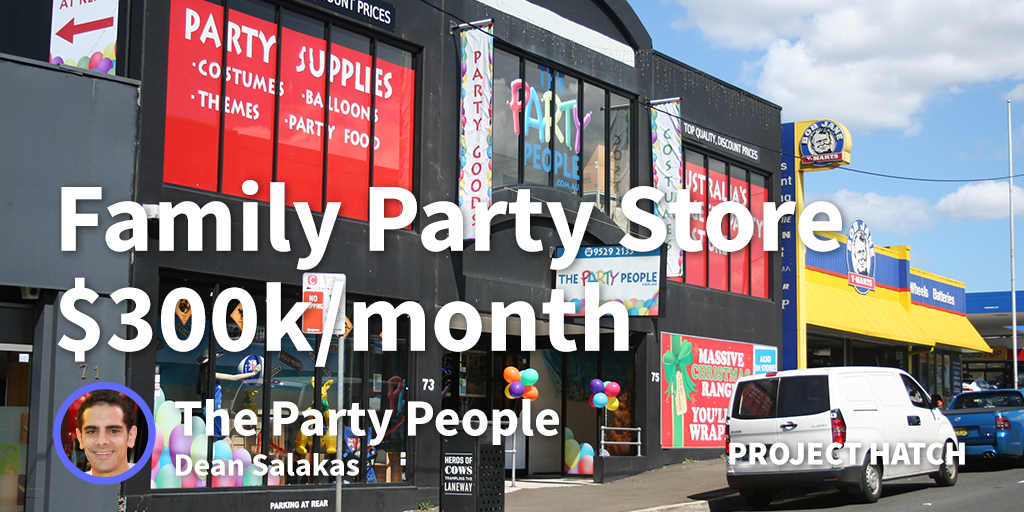 Her passion for parties led her to open a small kids party venue with her father. The venue also sold a small amount of balloons and party supplies. Around the same time McDonalds also launched party rooms and so the concept didn’t take off but sales of party supplies did so the business evolved into a party store.

In 1998 Mala decided to launch an online party store making her the first in Australia. The business grew as a result. In 2007 my brother and I took over the business and focused on the digital side of the business which accelerate growth.

How did being on Shark Tank affect your business?

Janine Allis offered us $400,000.00 however we turned it down as she wanted to much of the business for the cash injection.

Shark Tank was amazing for the business. Over 1million people watched us tell our story of our business for 10 minutes because they wanted to watch it and not because it was an advert so it was far more powerful in raising our business profile than any advertising. The website crashed the night we aired. Given we had worked with our hosting company to avoid such an issue, that shows the sheer volume of people was more than anyone could have expected.

From a marketing perspective the worst answer to this is “everyone”. But for us, its very hard to narrow a specific demographic. We cater for every birthday from 1st to 100th, we do baby showers, weddings etc etc and then there are seasonal and sporting events like Octoberfest, halloween etc. Literally everyone could be our customer. We like to think of our customer as someone who wants to have an amazing celebration and wants to impress their guests.

We get asks for strange things all the time. From blow up doll’s, to dead bodies (for halloween), to fake poo. We are a party shop, plenty of fun to be had!

Generally balloons are our best sellers however as we have lots of seasons its varies each season from Spider web at Halloween to easter hat and easter.

How did you initially fund the business?

The business originally grew organically. When my brother and I took over, we actually did have to purchase the business with a loan however within months of taking over we were able to renegotiate trading terms with our suppliers giving us the cash injection we needed to fund the business.

Did you run any companies prior and what motivated you to start your own business?

Yes, I ran a DJ hire business for many years. Before The Party People Dean was a business analyst at Woolworths and Peter was an Exercise Physiologist and Bounce. Peter and I both had roles we enjoyed that offered further career progression, however the thought of giving something a go was too tempting. We really saw a gap in the party supplies market we thought we could fill.

When Peter and I took over it was just a family business with 1 employee, however we just recruited from Seek. Most of those first few hires are still with us today and have now been with us 9-10 years.

Don’t start a business, its too hard. If you ignore my advice, you might have what it takes.

Funding, growing retail requires a large amount of money to fund each store so we just need to wait long enough for profits to build up enough to be able to grow.

We will consider capital raising in future to grow our business however the timing needs to be right as currently its a difficult environment to raise capital for a retail business.

What are the top apps your business could not run without?

It’s a task management tool and its been instrumental in helping our team coordinate tasks where multiple people are involved.

It’s a staff management software that coordinates the team, rosters, time sheets and employees pay. Before it there was a lot of time spent managing those things.

Sometimes we use microsoft doc programs however when collaboration is required we often use google docs instead.

What are you working on now?

We just launched a Halloween superstore in Melbourne as a pop up concept. Depending on the learnings we may just consider rolling out multiple halloween pop up’s next year.

We are also considering opening another party store next year however depending on the above it may affect our available cash flow to do this.

Would you ever sell the business?