We are actively being approached by prospective buyers/investors with anywhere from $100M to $450M to spend/invest.

Growing up as a kid in inner-city Washington, DC, I always had the gut feeling that I was meant to do something big. Although I had absolutely no idea of how I was going to get there, I was 100% certain that it was to be. However, it wasn’t until high school, located in a more affluent area than my own, that it became clear to me that my path to “something big” was entrepreneurship.

With WeWorked in particular, my Co-founder John Holmes and I birthed the idea following many years of experience working for small businesses that often struggled in addressing their organizational time and attendance needs. The solutions they employed were almost always either unaffordable, too complicated or just not very good. And many times they were all of the above. 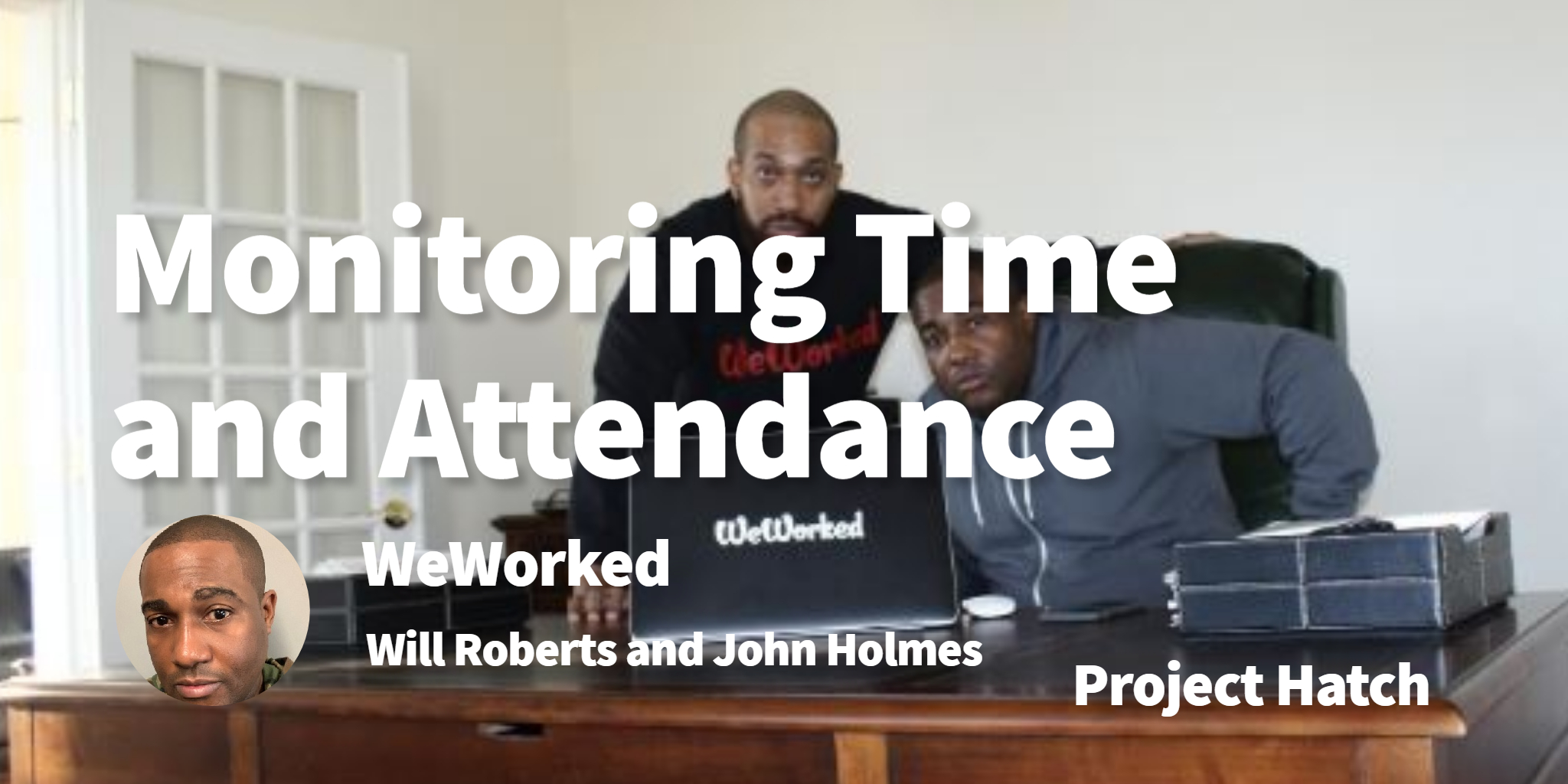 Both John and I were software developers by trade, so when he pitched the idea to me, it was a no-brainer. We consciously made the decision to use “Open Source” software to develop the prototype. So the only substantial investment required to launch our startup effort was our time. That decision ultimately placed us in a very unique position by which we were able to launch our tech startup with absolutely no outside monetary investment.

Given that we both had full-time jobs, we were required to work evenings, late nights, and weekends in order to get to a point where we could launch. I can confidently say that the time and effort that we invested upfront in developing the prototype is easily equivalent to a minimum $2M cash investment.

From inception, I remember us making the analogy that we wanted to position ourselves to be the equivalent of the merchants that sold picks and shovels during the Gold Rush of 1849. Admittedly, we knew that timesheets weren’t the sexiest or innovative idea but we also knew that almost everybody needed them in their quest to launch and sustain a successful business endeavor.

Although we had a solid target demographic in mind, we unintentionally made an assumption that may have led us in a slightly different direction initially. As it turns out, we were somewhat blinded by the fact that we were physically located in the States. As American citizens, we are subconsciously conditioned to believe that business only occurs within the borders of the 50 states. However, an extremely aggressive and successful SEO strategy would prove that those borders were imaginary. We started out thinking that our target demographic existed solely within the U.S. But as it turned out, our customer base was indeed the entire globe.

There was one customer in particular that made that ever so apparent. This company was a UK-based retailer of auto tires with several thousand employees. They signed up for a free trial of our system and loved it with one exception. The system was designed for use in the U.S. Therefore, things like currencies, date formats and timing of notifications didn’t align with their specific needs as a foreign entity. John and I put our heads together and determined that this was a golden opportunity to make the product more flexible and internationally friendly. We offered them an unlimited subscription for a discounted flat fee with the agreement that we would make changes to accommodate their needs moving forward. This move ushered us into the worldwide market where we now host timesheets for more than 50k subscribers in over 120 countries.

John and I met while working for a small contracting firm in DC where we developed custom software for the federal government. The entire team consisted of only about (5) people and each of us were required to be heavily involved in the development process from design to delivery. We were all cross-trained so that we could perform interchangeably and fill-in for one another at any stage of the software development life cycle.

As I mentioned earlier, I knew from a very early age that I ultimately was going to start my own business but at the time when John and I met I still didn’t really know what that business was going to be. I can recall he and I often bouncing various business ideas off of one another.

Although we didn’t make the decision to launch WeWorked until many years later, I would say that this experience created a solid foundation and inspiration for where we are today. The experience that we gained during that period was the perfect springboard onto what would eventually become WeWorked.com. We knew that we could definitely work together and build just about anything we wanted. In addition, John and I knew each other's skill level and work ethic. We had been in the trenches together and emerged victorious on many occasions.

The job where John and I met actually turned out to be my last experience working for someone else. I ended up leaving that job to start my own contracting firm. Dealing with challenges in my personal life at the time, I was really put into a situation where I had absolutely nothing to lose. Taking my current circumstances into consideration along with my desire to ultimately be an entrepreneur, I came to the conclusion that it was the perfect time to start my own business.

The challenges of starting a new business served as a welcome distraction from what I was going through in my personal life. I was able to redirect that negative energy into my new found endeavor. In the beginning, most people either thought I was just talking and ignored me and/or felt I would ultimately fail. It wasn't until people started seeing the fruits of my success as an entrepreneur that they started to take notice.

I formed my company in 2005. Four years later, John approached me about launching WeWorked. My experience as a business owner leant itself perfectly to what we were about to do. I was able to bring four years worth of a real life working perspective to the product development process.

What have you learned?

Our business model and strategy employs many unique concepts that are still widely unheard of in the software industry. We don’t offer telephone support. We don’t employ a sales team. We don’t offer product demos. Yet, we compete neck and neck with major industry players like TSheets and Replicon who have estimated investment totals of $20M and $40M, respectively. These companies and many similar are bleeding cash and wouldn’t survive 30 days with VC money.

Given that many of our concepts were so groundbreaking, there was no frame of reference or advisers to seek guidance from. In fact, we had two mentors that continue to advise us to this day. Their names are “Trial” and “Error”.

The beauty of launching your own product with no outside investment is that there’s never a right or wrong. Things either work or they don’t. Whatever works, we keep doing it. Whatever doesn’t work, we either abandon it or make adjustments and retry it later. It's that simple. We don’t have investors that we have to answer to and seek approval from. If at all possible, bootstrapping is definitely the way to go. At this point, we’re highly profitable and have no incentive to nor under any pressure to enter into a deal that doesn’t serve in our best interests.

The best advice that we can give someone starting out is to have them understand that the best business ideas don’t require large amounts of money to get started. Time is your most valuable asset. Don’t be afraid to launch a product that already exists. Sometimes there’s an existing void within a market that can be tapped into very lucratively. Technology can be used to reach customers all over the world. The right product, pricing, and marketing can allow you to compete with the biggest and best.

Our biggest sales driver to date has been aggressive SEO marketing. However, for a brief period while we were listed on the Wikipedia timesheet software comparison page. During this span, we experienced a surge of 1000+ sign ups within a 48 hour period. Although our listing was subsequently removed soon thereafter, it became clear that the key to us blowing up exponentially was simply exposure. We were literally one magazine article or press interview away from being purchased for $350M like TSheets.

We remain competitive by actively soliciting feedback from our customers and regularly holding Product Enhancement Meetings where we review customer requests and make the decision on implementing them based on a variety of factors. In addition, we place a heavy company-wide emphasis on delivering exemplary customer service and customer retention.

As mentioned earlier, we host timesheets for customers worldwide. We are truly an international business. Therefore, a simple 9-to-5 support model is not feasible. We provide customer support around the clock, seven days a week and pledge to respond to all inquiries within 24 hours.

What are your favourite books?

What are your next steps for WeWorked?

In response to an overwhelming interest from our subscribers, we currently have plans to implement an API sometime in 2020 Q2. This will aid our customer retention efforts by providing our subscribers with the ability to automate many of their processes and reports that are fed by WeWorked data.

Further down the road, we plan to expand into the payroll processing and payroll advance market. These offerings are an organic progression from what we currently do. Many of our customers use data from our system to forward to their payroll processor. Our ultimate goal would be to allow our subscribers to process payroll totally within WeWorked at a fraction of the cost that they are currently paying. Additionally, employees will be able to request payment for a portion of their current pay cycle that they’ve already worked without waiting for payday. This will be a much more economical and less predatory alternative to payday loans.

Although we prefer not to disclose specific sales revenue at this time, we will say that we are actively being approached by prospective buyers/investors with anywhere from $100M to $450M to spend/invest and we haven't pulled the trigger on any of those. So we’ll leave it up to the readers to do the math.

John and I have had discussions about the possibility of ever selling. The short answer is yes it's possible. For the right bottom line figure, consideration will definitely be given. We will definitely know what that figure is when we see it.

Would we ever consider outside funding? The answer is also yes. If we determined that we could enhance WeWorked to take it to the next level and a huge cash infusion was the best way to get us there, we would definitely consider it. Take the payroll advance feature that I spoke about earlier. That is something that a huge cash infusion would allow us to launch on a much larger scale and faster than without.