Analytics Software to Track the Health of Employee Populations

Rod Reasen and I started the Healthiest Employers awards in Indiana in 2009 with a goal of understanding what employers are doing in corporate health and to recognize leaders in corporate wellbeing. Today, the designation is conducted in over 45 U.S. cities with 10,000 participating employers, including 72% of Fortune 100 companies. 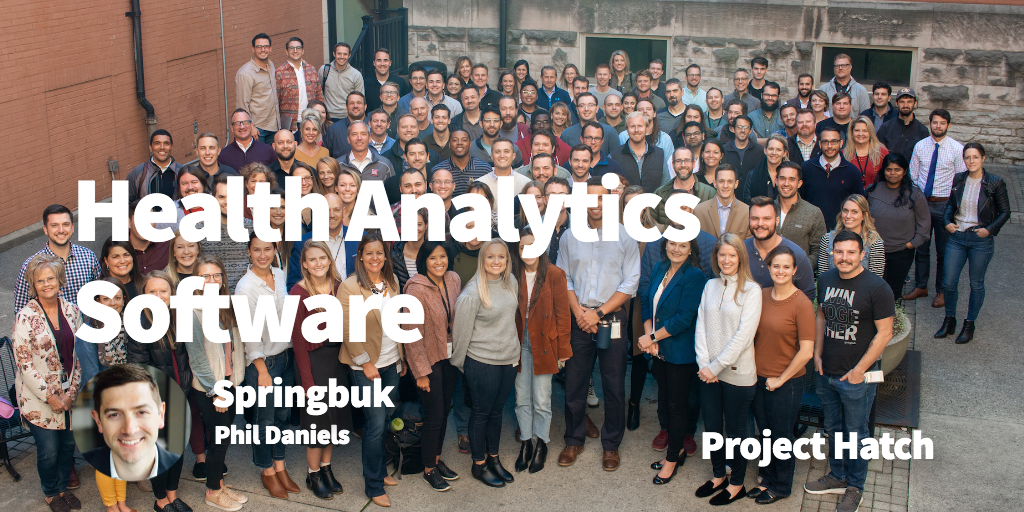 With a front-seat to employer wellbeing, Rod and I identified a common thread: Employers lacked the information to make and measure key decisions in the health of their population. In 2015, we launched Springbuk, a Health Intelligence platform. Now, 8,000 employers that represent 60 million employees later, our purpose has remained the same - to provide actionable insight into managing population health.

When Rod and I realized the gap in the marketplace, identifying an opportunity to understand an employer’s health data, we realized we had a chance to meet a need. Initially, we took this thesis back to employers in the marketplace to gauge interest, and from there, we learned that employers didn’t need more data, they needed direction.

By seeing the need through the lens of the Healthiest Employers Awards, we had the confidence to forge ahead with their idea, and build the product - Springbuk’s Health Intelligence platform. By initially taking the product to local employers in the Indianapolis area, we were able to find the validation needed to build a meaningful tool that is able to change lives.

Who is Springbuk’s target demographic?

One of the strangest things I experienced when first starting out was potential customers not wanting to pay for the beta product. When Health Intelligence was in its infancy, it was still very new. Fortunately for Rod and myself, the product has proven itself time and time again to be worth the investment.

How did you find your early employees?

As hindsight is always 20/20, I stress that the best tip for finding employees when you’re first starting out is to not undervalue the importance of having an authentic vision for the company. In the early days, people take risks to join an unproven startup. People don’t quit their day jobs to take a pay cut, work out of someone’s basement, or be uncertain by what the future holds. By finding a unified, motivating factor for employees, it allows everyone to see the end goal and the vision for what you’re trying to accomplish.

I started a marketing agency in 2007 that I stayed with through 2013. In fact, this was where I met my Springbuk and Healthiest Employers co-founder, Rod Reasen.

Prior to the marketing agency, Springbuk, and Healthiest Employers, I was working for a major Fortune 100 financial services company. While this might seem like a dream role for others, I felt as though by working in such a large company I wasn’t able to see or feel the impact I was having. Often times in conference rooms and seeing a lack of speed or change or adaptability, I felt as though I must be the one doing something wrong. But rather than changing my mindset to match my job, I decided to change my job to match my mindset.

When I first started out, there was some level of apprehension from my friends who were less entrepreneurial. However, I was willing to take the risk and if it failed, I could always go back to what I was doing before. However, I didn’t look at it as taking a risk, I looked at is as making an investment in myself and my worth ethic. By the time Springbuk came around, my third venture as a founder, my support team knew I had what it would take and trusted my vision if I said it could work. However, as with many that work in health tech companies, my network still isn’t always quite sure exactly what Springbuk does.

What have you learned since starting a business?

What motivates me when things go wrong is knowing that usually means things are about to go right. In the life of an entrepreneur, each day sees high highs and low lows, often within the same hour. There’s almost the “dog year” mindset that each week is equal to seven, due to the amount of movement, adapting, and activity that can happen in a single week. However, seeing the work pay off makes it easier to not get too hung up on the lows.

My best advice for someone starting out is that you cannot spend too much time with your customers. It sounds obvious, but with rapid-fire change if you don’t have constant feedback, even when it might be negative, there’s no way to learn and grow. Applying that feedback to your business and your product is the best way to create success.

What apps do you use on a daily basis?

As with most companies, Springbuk heavily utilizes its CRM system. It is the backbone for scaling the company, drives the marketing initiatives, and is key to engaging with the ever-important customers. For the purposes of internal communication and company culture, Springbuk also commends Slack as an essential tool.

In the past five years, Springbuk has been focusing on responsible growth that is good for the team, customers, and stakeholders. With the continued vision to “prevent disease with data”, we are still focused on growing Springbuk for years to come. After several years of working to create a superior product, the current focus is to scale and continuously improve it.