Arnold's Early Road to Mr Olympia - Mindset of A Champion.

When trying to create businesses we often read about successful founders and companies. This makes sense as they have done what we're trying to do. But there is a lot to learn from other fields... 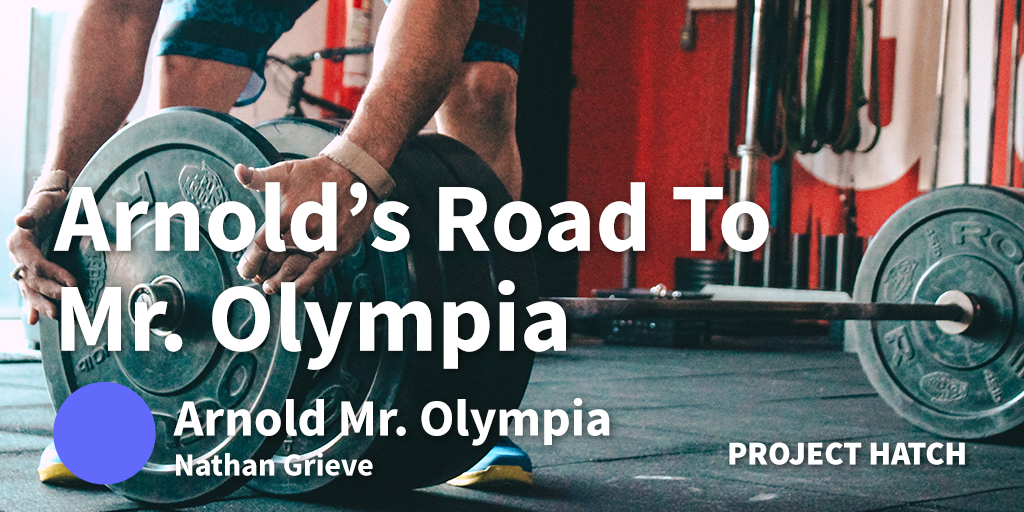 Arnold Schwarzenegger was born in 1947.

He was born a town called Thal, in Austria to strict parents. Life in Austria after World War II was tough and his mother spent time travelling up and down the country in search of work to feed her family.

Gustav, his father was tough. A lot of men in the post-war years were bitter and let those around them know it. He was in the local police department and ran the household like a military training camp. Every day when they woke up, Arnold and his brother were given a long list of chores to work through; fitness training was a daily occurrence. Gustav favoured Arnold's brother due to an ungrounded suspicion that Arnold was not his biological child.

Arnold spoke of this as a moulding experience, "I was one who did not conform, and whose will could not be broken." This type of upbringing wasn't uncommon for the era and he started building grit. Arnold mentally escaped by dreaming of a better life and moving to American to create it. To him, America was a country of hope, it was also the country that saved Austria from becoming a Soviet Satellite State.

"My hair was pulled. I was hit with belts. So was the kid next door. It was just the way it was. Many of the children I've seen were broken by their parents, which was the German-Austrian mentality. They didn't want to create an individual. It was all about conforming. I was one who did not conform, and whose will could not be broken. Therefore, I became a rebel. Every time I got hit, and every time someone said, 'You can't do this,' I said, 'This is not going to be for much longer because I'm going to move out of here. I want to be rich. I want to be somebody.'"

Schwarzenegger's interest in body building began during school and he picked up his first barbell in 1960, when his football (soccer) coach brought him to the gym. As he saw progress he began to also envision body building as his route out of Austria to a fresh start in America. He became so obsessed with training that he broke into the gym on weekends to train.

“It would make me sick to miss a session. I couldn’t look at myself in the mirror the next morning if I didn’t train.”

By 19 he had won a few local competitions and it was time to start setting his sights a little higher. He had his eyes on the 1966 Mr. Universe competition taking place in London.

Schwarzenegger needed to start training at a gym with professionals. He headed to Munich and quickly realised how expensive the city was. Arnold took residence in Rolf Putziger's gym where he slept in the store room. He also worked at the gym worked out for hours before and after work, every day.

Taking his career to the next level meant entering some big boy competitions - he chose Mr Universe. What Rolf did not tell Schwarzenegger is that his gym was not doing as financially well as he had let on. Rolf binned Schwarzenegger's Mr Universe application after worrying that paying customers would leave when Arnold did.

Rolf's actions caused uproar in the bodybuilding community and it came together to petition the competition's organizers to allow Arnold to enter.

Permission was granted and Arnold headed for London. When he arrived he got a shock when he saw the other competitors. He noticed he was the biggest. In his competition class he ended up placing second.

Arnold entered the competition with no expectations but had done well. If he knew he had a chance he could have trained harder and won. It caused a mentality change that would stick. Schwarzenegger would never enter another competition without the expectation to win.

Aim high and prepare to win.

This new mindset fuelled his training and in 1967 he came back to the same competition and won. It is the same mindset that won him Mr Olympia 7 times over, saw him featured in multiple blockbusters and coining one of the most memorable film lines ever, "I'll be Back". It allowed him to enter public office as the Governor of California - a state which would have the worlds 6th largest GDP charts if it were a country.

In this article I wanted to focus on Schwarznegger's early life, into what motivates him and how he prepared his mindset for success. I wanted to include two additional quotes I thought were interesting and allow us greater insight into his way of thinking.

When a person is at a disadvantage in life, and they find success, they often come to understand their craft in a very fundamental way because more of their wins are hard fought.

"Writing out my goals became second nature, and so did the conviction that there are no shortcuts. It took hundreds and even thousands of repetitions for me to learn to hit a great three-quarter back pose, deliver a punch line, dance the tango in True Lies, paint a beautiful birthday card, and say 'I’ll be back' just the right way."

"I never argued with people who underestimated me. If the accent and the muscles and the movies made people think I was stupid, it worked to my advantage"

Train with the belief you can win and you will be much more likely too.

Aim high and prepare to win.

Never blame your parents. They have tried their best with what they have, even if they have been too overbearing or protective. Parents mould us and it is our job to make the most out of those experiences.