Break a Habit (The Scientific Approach)

Despite good intentions, we often fail to break bad habits. 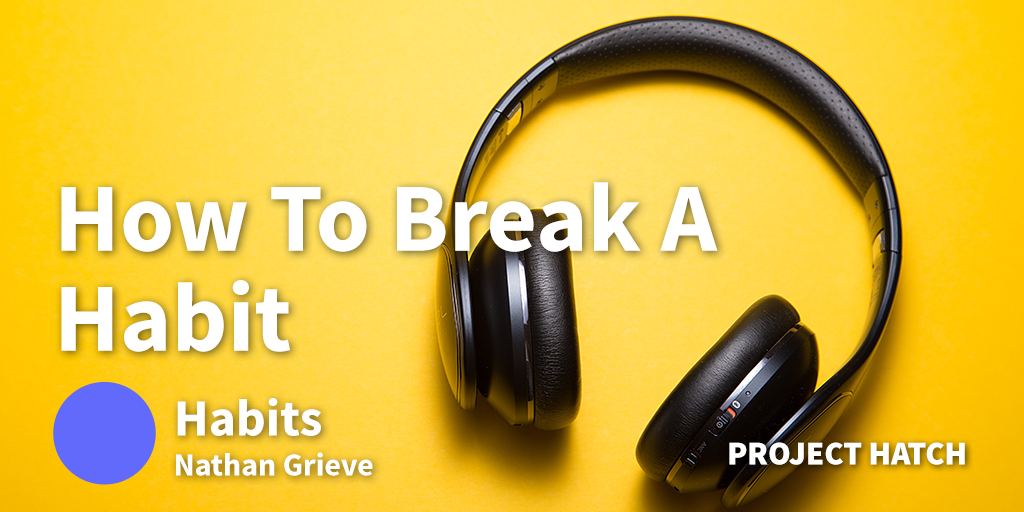 To reach your goals you will have to do more than just create new habits. You also need to figure out which habits are leading you astray... and delete them. Losing weight requires exercise but is largely controlled by eating less.

How to Break A Habit

We will explore the science behind breaking habits and why using willpower gives you a low chance of success.

Find out how one word could increase the likelihood of breaking a habit by 64% and how the if-then method boosts your chances by up to 300%!

It's difficult to motivate yourself to pick up a new habit, but it's even more tricky to eliminate an old one. Often, it's these bad habits, rather than a lack of new ones, that prevent us from achieving our goals - Habits so engrained we perform them without thinking.

Every habit you create, whether bad or good, is for a reason. You behave in a way that provides some benefit to you, even there's negative side effects. The benefits present themselves in different forms, some can be psychological and others physical.

Developing a new habit takes around 66 days and breaking a bad one about the same. Both can take multiple attempts and be incredibly frustrating without planning.

How to Break a Habit

The Journal of Consumer Research published a study examining the use of linguistics and self-talk in decision making. They brought in 120 undergraduates who were trying to eat more healthily.

When faced with temptation, one group was told to say, "I can't" and another group, "I don't". On the surface, both words have a similar effect - two slightly different ways of saying "no". However, the difference is internal.

When you say, "I don't", you are making a choice not to do something and choices are physiologically empowering. You confirm to yourself that do have the strength and willpower to say no. On the other hand, "I can't" is a restriction, something you want to do is being blocked. It undermines your sense of free will.

Psychologists have confirmed in recent years that small changes in language can have a big impact on behaviour and feelings.

Tests were run using healthy granola bar snack against the other sugary option. Students who used, "I don't", chose the healthy option 64% of the time, against 39% for who said, "I can't". A 64% increase in outcome came down to the use of one word.

Replace a your response

A habit can be broken down into three steps.

Habits are formed by responding to your surroundings. Something triggers a response, you react and in most cases you can decide how you respond. If you could remove the trigger, you could also remove the response. However, it is difficult to change your environment enough to completely erase of the trigger.

If stress causes you to smoke, it is impossible to prevent ever becoming stressed, but you can change the way you react to it. Replacing your smoking response with breathing exercises (or another positive response) instead of trying to "just stop" give you a far higher chance of succeeding.

Part of the reason programs such as Weight Watchers are successful (at least in the short term) is due to the to the accountability they provide. Knowing that other people expect you achieve your goal is highly motivating.

Call a friend each evening and discuss what you have been working on. Whether you're writing a book or trying to get fitter, accountability for your goals will improve your chances of success.

Rather than focusing on the negative when you're starting out, add "however" to you sentence to transition it to something that reminds you of your goal. Remind yourself of where you're going. Whenever you catch yourself in a downward spiral, don't forget the end goal.

I failed my practice exam... however I know with necessary work I can pass the real thing.

I didn't get the job... however I can receive feedback and improve on my weak areas for next time.

A lot of the time, we're gung-ho with trying to stop bad habits and attempt push through using sheer will. But if we had the will power stop the habit we would have done so before now. There are many studies showing a human tendency to overestimate their capacity for self control and it ends up letting them down when they get into difficult situations.

You need to accept that your willpower has its limits and may not always be able to get you to do things you find time consuming and difficult.

If-then planning sounds simplistic but can help you get the job done - in a less stressed way too.

If it gets to 11am, then I will stop working on that project and begin the project Rebecca assigned.

Planning what you are going to do and when your going to do it ensures you don't have to think about what to do next while you're working. You don't even have to hesitate. Research has shown that when you deliberate for even a few seconds, your likelihood of completing the task drops dramatically. Deliberation brings willpower into play and you only have a limited supply. If-then planning takes though out of the equation because you prepare what you're doing in advance. It has been shown to increase goal completion rates and productivity by over 200%.

I have offered 5 strategies here, some of which sound difficult. They require prior planning and will still use a fair amount of will power but they do work. You will, as always have to put in the work to generate a result but these tips should make it a little easier.