Deliberate Practice - The Only Method You Need To Succeed

Wolfgang Amadeus Mozart is considered the greatest composer ever.

At three-years-old he played cords on the piano, could compose at five and finished his first opera at 14. 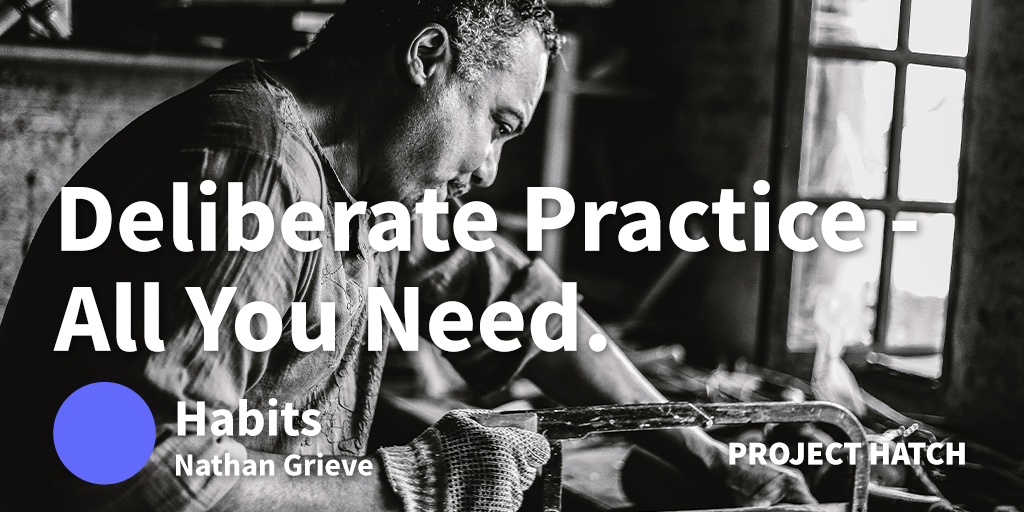 “The miracle which God let be born in Salzburg” is how Mozart's father described him.

Was Mozart born with his talent? Was he more talented than his sister?

We will revisit his story shortly...‌

Newspapers are full of stories describing overnight sensations - writers, musicians and composers who suddenly become successful, the 'naturals'. These tails have devastating effects on judgement and performance.

A professional golf player called Sam Snead was described as "the best natural player ever" - (Golf Digest). He won 7 major championships and was revered for his swing.

His swing was far from natural...

"People would always say I had a natural swing. They thought I wasn't a hard worker. But when I was young, I'd practice all day and then practice more at night in front of my cars headlights. My hand bled. Nobody worked harder at golf than I did."

Snead hated it when people called his swing 'natural' as it belittled the thousands of hours of deliberate practice he had put it.

Benjamin Bloom published a paper titled Developing Talent in Young in 1985 where he looked into the correlation between personality traits and talent. He studied the upbringing of 120 high achievers who had attained international accolades in academic fields.

Initially, Bloom found it difficult to find any predicators of individual success. There has been more recent research showing that there is little correlation between IQ and elite performance in many academic fields. In a school study, self-discipline accounted for twice as much variance in grades compared to IQ.

“The child who ‘made it’ was not always the one who was considered to be the most ‘talented.’ Many parents described another one of their children as having more ‘natural ability.’ The characteristics that distinguished the high achiever in the field from his or her siblings, most parents said, was a willingness to work and a desire to excel. Persistence, competitiveness, and eagerness were other often-used terms” - Developing talent in young people

How do Athletes Compare?

Pablo Torre of sports illustrated estimates that for Americans between 20-40, if you are over 7ft tall you have a 17% chance of being in the NBA. Perhaps this is the shortest path to becoming a millionaire.

Another sports study, this time, into baseball, found that, on average, players have 20/13 vision instead of normal 20/20 vision. This means that what a normal person sees clearly at 13 feet, a baseball player sees clearly at 20 feet. A highly beneficial trait for batsmen with 90mph balls flying at them from 60 feet. (ref. A Visual Profile of Major League Hitters)

When Malcolm Gladwell released Outliers in 2008 it became an instant hit. The book hit the top of the New York Times best-sellers charts and stayed there for 11 consecutive weeks.

In the book he coins a notion of needing 10,000 hours of concentrated work to become an expert in a given field and provides multiple examples:

The Beetles stayed and performed in Germany over 1200 times between 1960 and 1964 contributing to their their 10,000 hours of playing time. When they came back, according to their biographer, Philip Norman, they “sounded like no one else. It was the making of them.”

Bill Gates reached his 10,000 hours at an early age after getting access to his high school computer in 1968, when he was just 13.

The point Malcolm Gladwell gets at here is that it takes focused practice, and a lot if it to become a leader in your field.

The major theme of the book is that to reach an elite level in any field will require a huge time investment.

But is that enough?

Some don't think so. They believe you not only have to put the hours in, but the practice also has to be deliberate.

What Is Deliberate Practice?

The goal from your practice is clear and specific.

You concentrate during practice, not thinking or getting distracted by other things.

"Consistently and overwhelmingly the evidence shows that experts are made, not born" - K. Anders Ericsson, Michael J. Prietula, Edward T. Cokely. The making of an expert.

Mozart was not born an expert.

His father was an accomplished composer who published a first of its kind violin guide that was translated into multiple additional languages.

Mozart’s father was accomplished in his own right and knew how to teach. He also spent a lot of time with Mozart giving him feedback and helping him learn. He put in long hours from an early age and his father knew how to guide him to success.

Mozart's sister started playing at the age of 7 and joined him on tours playing for the European elite until she stopped playing when she reached marriage age, which was 18 at the time.

What does this mean?

Mozart may have been bright but the main factor contributing to his success was deliberate practice. Mozart's sister also excelled due to the environment they were brought up in.

What can we learn?

Get a mentor and start as early as possible.

Find out what you need to know before you start your journey.

Make sure you set goals that clearly demonstrate whether you’re actually being successful or just making noise.

And put in the hours of deliberate practice.

Successful people are relentlessly dedicated at what they do. They can endure long periods with only slight chances of a positive outcome. When they become disappointed, they can pick themselves back up again and work tirelessly to get better.

Being hard working is not enough though. We have seen that practice needs to be deliberate. In addition to this you need to narrow your scope. Successful people are not working on many different things at once. They are working on one thing and putting all of their effort into it. This is why it helps if you have a natural curiosity in what you do... or perseverance if you don't.

Grit is what will pull you through when you've hit a roadblock or are not enjoying something. Whether it' s the final few miles of a marathon or finishing writing a book you're no longer interested in. It is the backbone to success and it is a muscle that can be trained.

There are four components to grit:

As we train a skill, the gains become increasingly marginal. Our interest in learning can also decline as the rate of learning decreases. When you first approach a skill like coding, you will learn how to create basic programs very quickly.

However, to master a skill you will need to take pride in the small gains. Masters will spend weeks making slight adjustments to one technique taking satisfaction in these small nuances are vital to maintain motivation on your way to mastery.

Start by blocking out two hours every day to focus on your most important task.