Normal CEO's worry about saying anything controversial... Not Elon.

Musk's humorous social media posts are not the only benefit of his open nature though, we also get great insight into how the mind of an exceptional entrepreneur works. 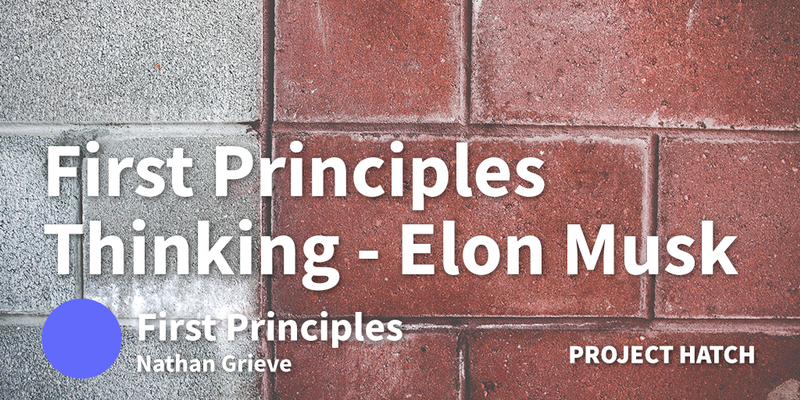 He's founded SpaceX, Tesla and more recently The Boring Company. Building any one of these companies extraordinary, building all three is out of this world.

And thats where he's heading. Literally.

Musk is a man famed for his work ethic, pulling regular 100 hour weeks and letting nothing get in his way.

How has one man managed to achieve so many astronomical projects?

Where Did First Principles Originate?

Greek philosopher Aristotle is believed to have coined the term over 2000 years ago. He described it as "the first basis from which a thing is known". He applied first principles to philosophical reasoning, which enabled his arguments to start from what he absolutely knew was true. Aristotle saw first principles as "key to performing any sort of systemic inquiry."

Elon used this approach while building Tesla. His biggest hurdle was reducing the cost of batteries.

"Historically it’s cost $600 per kilowatt-hour, and so it’s not going to be much better than that in the future."

Musk wasn't happy with that answer.

"No, what are the batteries made of?"

"Okay, what are the material constituents of the batteries? You just have to think of clever ways to take those materials and combine them into the shape of a battery cell, and you can have batteries that are much, much cheaper than anyone realizes.”

A battery generally contains cobalt, nickel, aluminum, carbon, some polymers and a seal can. Musk figured out that the raw parts cost just $80 per kilowatt hour on the London Stock Exchange but battery prices were $600 per kilowatt. All he needed to figure out was how to assemble them more cheaply. Breaking down the battery into it's raw materials made it clear that there was opportunity for huge cost savings. He also noted that the battery is the most expensive component of the electric car causing the technology to be prohibitively expensive.

Musk knew that if he solved the battery issue, it would be a huge step towards his goal of building mass market electric cars.

He managed to quickly cut the costs of batteries to around $300 per kilowatt hour initially and has continued to cut costs around 15% per year since.

“Somebody could say, in fact people do, that battery packs are really expensive and that’s just the way they’ll always be, because that’s the way they’ve been in the past. Well, no, that’s pretty dumb, because if you applied that reasoning to anything new, then you would never be able to get to that new thing.”

“Boil things down to fundamental truths… and then reason up from there.”

Musk sees it as important to build up from fundamental truths instead of by analogy. Our lives are often led by analogy.

A solution does not need any existing proof, as long as an idea can be conceived and makes sense from its raw concepts, it can be achieved. He demonstrates this with The Boring Company. Musk became increasingly frustrated with LA traffic and thought there must be another way.

In his mind this meant either flying cars or tunnels. Why does driving have to occur on a road and why do we have to drive?

Tunnels are expensive to dig, costs reach up to $1 billion per mile. Musk realises he needs to reduce the cost by at least a factor of 10 to make it viable. When this issue is solved the benefits of tunnelling are enormous and it is scalable, unlike 1 dimensional roads.

Tunnels can be built to any depths meaning any volume of traffic can be addressed.

They are underground, hence weatherproof.

Tunnel construction is silent and does not impact local communities.

"The normal way we conduct our lives is we reason by analogy. We are doing this because it’s like something else that was done, or it is like what other people are doing. You boil things down to the most fundamental truth and then reason up from there."

We think via analogy because it is easier. When modifying something that already exists, not as much brain power is required as most of the work has already been done for you. The caveat is that you will end up with a result very similar to the one you modified. With first principles, you start again with just the raw building blocks and create something completely different. Starting from the beginning requires more brain power but leads to real change.

When the aeroplane was invented in 1903, a subculture of futurists was born. People started to believe that one day humans would reach the moon... and they were right. Development stalled for around 50 years but research rapidly advanced during the space race and culminated with the moon landing in 1969. More people started believing in space travel, books were written about warping space and thought a Mars landing was imminent. Sadly, reality did not keep up, and it looked as though another 50 year research gap was forming.

NASA funding peaked at 4.4% of the federal budget in 1966, a number that has declined ever since. Because of this, NASA just launched the occasional space shuttle, which convinced people they were still there but space exploration was on the decline.

He likes to tell the founding story of how he stayed up late searching NASA's website to see when they were launching crewed missions to Mars.

Musk wanted to launch a rocket and started looking for providers. He discovered that it would cost far too much. Next, he tried to buy a intercontinental ballistic missile but was put off when the price was hiked multiple times.

Rather that letting another supplier let him down, in true Musk fashion, he decided to build his own. Naturally his friends tried to talk him down. Something quite rational when a friend tells you they are going to start a rocket company. Musk ignored them and began reading hundreds of books on spaceflight.

He started by applying first principles to Rockets. Musk needed to find out the raw material cost. What he discovered is that the total cost of a rocket including fuel was around 2% of the total rocket cost. In a similar fashion to Tesla, he just had to assemble the parts more cheaply.

Musk doesn't care what the competition is doing, he will always break down problems to their primary constituents and create his own solution.

“If I had one hour to solve a problem and my life depended on solving it, I would spend the first 55 minutes understanding the proper question to ask, for once I know the proper question, I could solve the problem in less than five minutes.” – Albert Einstein

How Can You Apply First Principles?

Write down a problem you are trying to solve.

Next, create a tree diagram, where all of branches are reasons why problem is difficult to solve.

For each of the reasons you identify, create branches detailing why those reasons are true.

Keep extending the branches until you get to a point where there are no reasons to explain them and you will have reached fundamental truths.

Build your new solution from these fundamental truths.

Your problems will still be difficult and using first principles will be more mentally taxing. Your brain will work harder but you will also be more likely to come up with something new and significant.

Can You Use First Principles When You Don't Have A Business?

First principles can be applied to anything. Take your daily routine for example, is everything you're doing essential. Are there areas where you could achieve the same result in less time? What could you be doing more efficiently?

When trying to eat more healthily, building your diet and exercise regime from first principles will help you create an achievable plan that you can enjoy.

First principles thinking is a technique that helps you approach a problem in the same way the first inventors of a solution saw it. You take the raw components of an idea and mould it in your own way, instead of doing it in the same way everyone else does.