How Fortnite Executed a Perfect Launch

Epic Games is experienced in creating and launching games with huge marketing budgets, but recently they took a different approach. 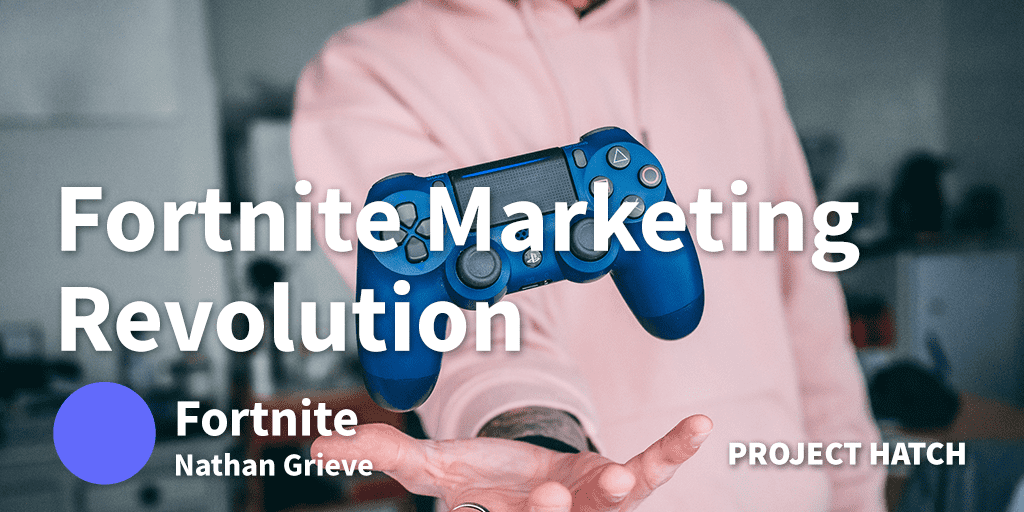 Fortnite was an unknown and untested game meaning they couldn't pump hundreds of millions into the launch.

Epic Games is experienced in creating and launching games with huge marketing budgets, but recently they took a different approach.

Fortnite was an unknown and untested game meaning they couldn't pump hundreds of millions into the launch.

It wasn't like another of their Gears of War series, which had an existing fan base.

With their new method, Epic Games generated $2.4 billion in 2018 for Fortnite alone and CEO Tim Sweeny thinks it's "evolving beyond being a game."

How Are Games Traditionally Launched?

When a new edition of Call of Duty arrives we can't help but hear about it. Activision, the games owner, rents major billboards, hires out space on public transport and buys ads all over newspapers, both on-and-offline.

This method leads to a huge number of sales in the first few weeks of launch and they know straight away whether the game is a boom or bust. The team would then have a party to either celebrate their success or drown their sorrows before cracking on with next year's edition.

Google Trends Data For Minecraft and Fortnite Popularity showing a slow launch until the game reached a critical mass of players. 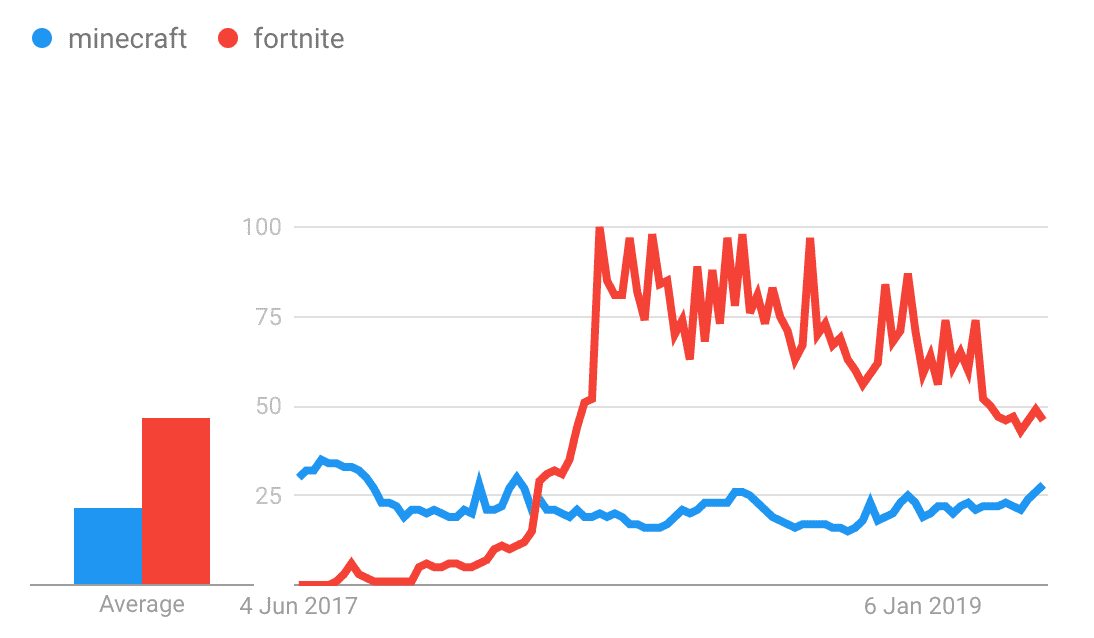 This approach has worked many times, but it does seem inefficient and difficult to attribute. How can you measure the number of sales from a given billboard? Additionally, gamers will see the game, want to purchase and then be forced to wait a few weeks for the release. Then, if the game is not received well, it can be difficult to recover.

But, there is another way and it is very effective.

Although Fortnite had a small launch in June, by March of the next year it was absolutely flying. The game surged passed Minecraft on Google Trends and did so in a way we have never seen before.

Google Trends showing the launches of Destiny 2, Call of Duty WWII and Fortnite

Destiny 2 and Call of Duty marketed their games in the traditional manner of spending most of their marketing budget around launch.

Epic Games did things differently and pulled it off.

Fortnite now has more active users than Netflix, 250 vs 155 million. It is one of the most watched games on the planet having accrued 83 million viewer hours this month and more than three times the number of Twitch streamers compared to any other game. 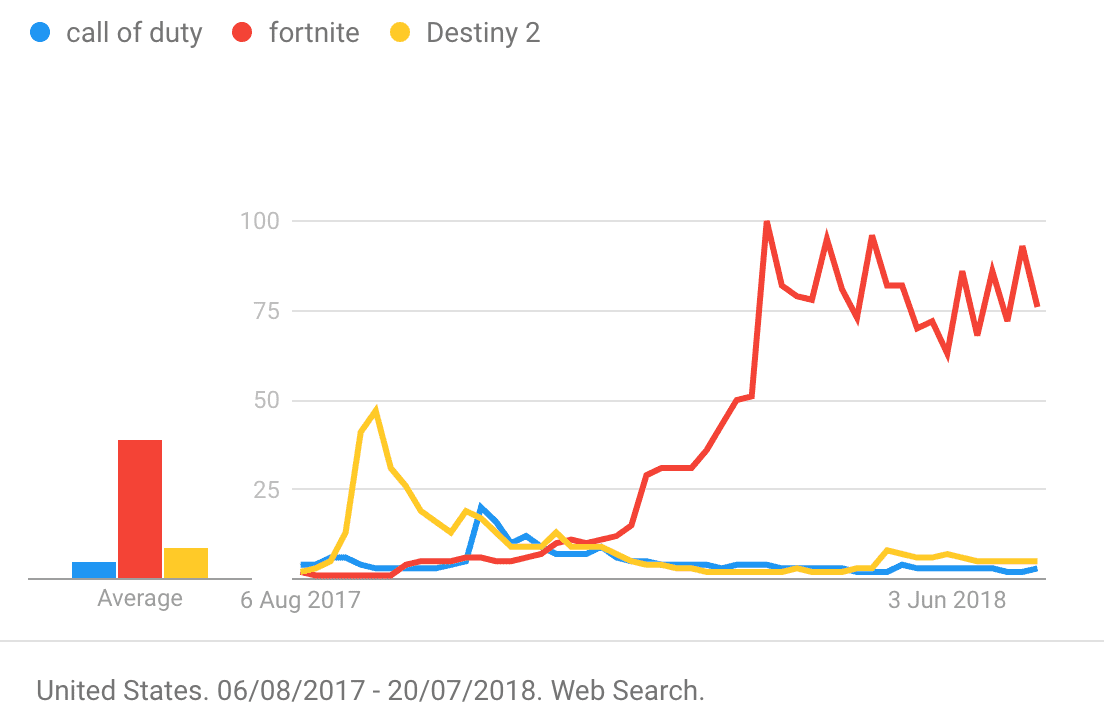 For those still unclear on how Fortnite works - 100 players fill a blue school bus suspended by a hot air balloon. Players choose where to drop on an island and fight to the death with weapons, armour and defences to claim victory by being the last player standing.

So How Did Fortnite Become So Popular?

One way we can say with almost certainty that no other gaming house has tried is a dance challenge. We can't say this was an intentional marketing stunt but it was incredibly effective in generating free promotion.

When a player makes a kill in Fortnite, they are allowed to celebrate their achievement with a dance. The dances are based on real life ones and one of the most popular includes "The Gallop" from Psy's, "Gangnam Style" music video released in 2012. The dances generated huge swathes of publicity and got featured on national shows and magazines.

The dances even made their way into football (soccer) with Antoine Griezmann celebrating his World Cup Final 2018 goal with the "TAKE THE L" Fortnite dance.

American Football stars got swept up in the wave too and quickly found out how difficult wins were to come by.

When researching for "The Progress Principle", a book by Teresa Amabile and Steven Kramer, they analysed 12,000 daily diaries of employees to find out how they felt about their work. The most satisfied employees were those who were, or at least felt as though they were, making progress towards a goal, this obsession with progress stretches into all aspects of life.

Fortnite taps into this desire for progress perfectly with Battle Passes - a paid for perk. They are a hybrid mechanic that combines the need for progression with fear of missing out (FOMO). Battle passes allow players to level up and achieve better rewards such as cool cosmetics and new dance celebrations. Levels are gained through completing quests and finding chests.

Each season lasts 10 weeks and players cosmetic rewards carry into the next season.

(All rewards from the battle pass are solely cosmetic. This allows Epic Games to generate revenue while staying away from the much hated pay-to-win concepts.)

Players who have not purchased the battle pass can level up in the same way but get rewarded with inferior bonuses and at each level see what they could have had if they paid for the battle pass. Fortnite allows users to upgrade at any point during the season and still receive all bonuses from previous levels, even if they weren't a pass holder at the time.

It is this mechanic that creates the strongest sense of FOMO. As players progress they become increasingly tempted to subscribe and receive the increasingly large pile of rewards they have earned. Players can only get the rewards from a given season during that season; you won't be able to get the battle pass cosmetics from a previous season if you start playing now.

Each season's rewards are limited edition.

Fortnite have added to this mechanic by allowing players to 'skip' through levels if they are running out of time to achieve a seasons rewards. At the end of the season players can purchase skips to obtain all the cosmetics for that season.

If your children don't care about cosmetics, there's little reason to buy. However, when you consider only 1 in 100 wins any given game - and it is the same small percentage of players regularly winning, it becomes more understandable that some children only care about the cosmetics... because they stand little chance of winning.

Epic Games removed every barrier to anyone playing the game that they could.

Fortnite is free to play - a factor that allows users to enjoy the game and gives Epic Games a chance to hook them. Whether gamers are in school, on the way to a concert or sitting at home, they can download Fortnite on any device, it will be free to play and up and running in 2 minutes. No more saving up or waiting for birthdays to start playing.

When Call Of Duty launches, they will often partner with either Playstation or Xbox and make their game solely compatible on one brand's consoles for the first 3 months. This might have made a lot of money in the short term and give them pre-game cash to spend on marketing but it alienated a huge user base that could only afford one console and it prevented them playing during the games most popular first few months.

Epic Games made their new release compatible with every console possible. Fortnite is downloadable on both Xbox and Playstation, and also available on PC, Nintendo, and phones. As soon as people saw a video of someone playing it or heard a friend talking about it, there were no barriers to getting started.

Fortnite is a shooter that satisfies gamers who are used to more potent games but is not too violent for young players (as reflected in its PEGI 12 rating). Children were prevented from playing Call of Duty due to the PEGI 18 rating, cutting of large numbers of potential players.

Fortnite is fun to watch.

Twitch is the major player in the streaming market and games that do well on there drive an immense number of followers. Fortnite is the most popular game on the platform. The most popular of Fortnite streamers is named Ninja. He was previously a professional Halo player making him well-positioned to become one of Fortnite's top players. He streamed his journey and started to amass a huge following. He also created a YouTube channel where he has amassed over 20 million subscribers.

Other professional gamers saw his success and how well people reacted to Fortnite and started making videos. Video makers who weren't even gamers began making videos as they saw the amount of views they could gain. Epic Games was getting hundreds of millions of video views for free and this led to the exponential growth shown in the Google Trends Charts.

Every aspect of Fortnite's marketing strategy was simple but incredibly effective. Epic Studio created a hyper-engaging game that only needed a push to take off. They took full advantage of relatively new streaming platforms and managed to generate hundreds of millions of free video views.