Dr. Maltz noticed that the post-surgery blues occurred for around 21 days until a patient got used to their adjusted body parts. He noticed a similar phenomenon in amputees too - for roughly 21 days post surgery, patients would have a phantom limb sensation before settling into their new bodies. 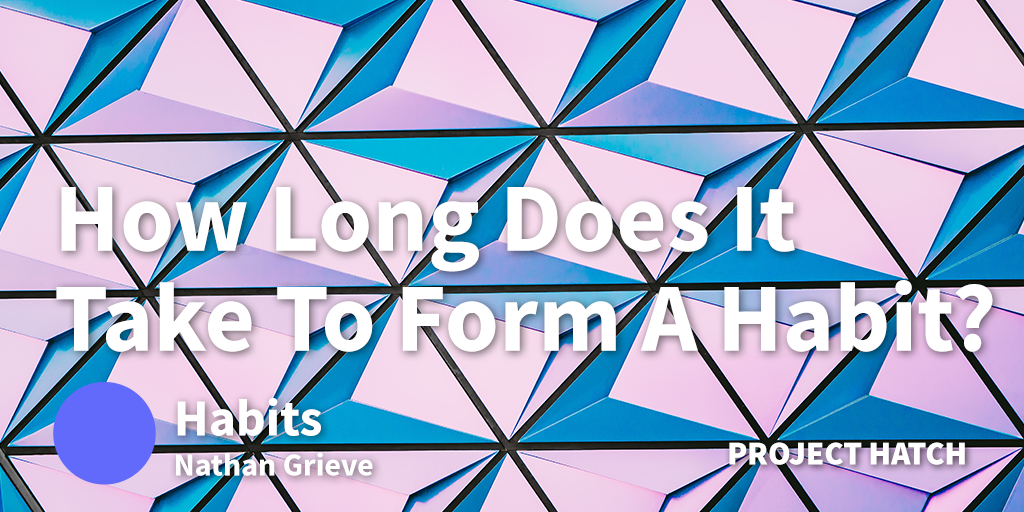 How Long does it take to form a habit?

While observing his patients, he got thinking about his own adjustment period. He took a similar length of time to get accustomed to change. When he exposed himself to something new or tried to pick up a new habit, it took roughly 21 days to feel routine. After this period, new sensations become familiar, they become habits.

Most people believe that 21 days is the time needed to create a habit. Repeat a task for 21 days in a row and 'aha!', a new habit is formed. However, this couldn't be further from the truth.

How Long Does It Really Take To Form A Habit

The Science of Concious Habit Formation

Can Habits Be Manipulated

" These, and many other commonly observed phenomena tend to show that it requires a minimum of about 21 days for an old mental image to dissolve and a new one to jell." - Maxwell Maltz

This is where the problem began.

Over subsequent decades, this quote became gospel for major players in the self-help industry. Words that made for catchy headlines were extracted from the book and publications seemed to miss the fact that Maxwell quoted a minimum of 21 days. However, "change your life in 21 days" was a far more appealing so naturally it stuck.

Maxwell's '21 day theory' was seen scientific fact as opposed to a minimum based on casual observations. Everyone liked the idea of being able to change their life in 21 days so it quickly spread. Three weeks is seen short enough to be motivating but long enough to be believable.

The Science of Conscious Habit Formation

There are necessary steps to habit creation.

The trigger is a stimulus that forces a response from your brain. We have primarily evolved to respond to stimuli that promote safety, food, water and reproduction and react to things that improve our chances of survival.

Response is the second step of habit formation, it is the way you react to the trigger. The response involves conscious thought whilst forming habits. Getting out of bed at 6:00 AM only occurs after you've thought (a lot) about punching the snooze button. The response we choose depends on how strong the trigger is (make sure the snooze button is out of reach to start with), how motivated you are to form the habit and the reward you will receive.

The final stage is the reward and it serves two purposes...

To implant actions on our brains that are worth repeating. Stopping the trigger (e.g thirst) will provide relief and release endorphins making us more likely to repeat the action.

The second point here emphasises the importance of setting small goals. By setting small goals that move us towards larger ones we give ourselves small doses of positive feedback and motivation making us more likely to reach substantial goals. Habits take just over 2 months to form in reality but it really depends what routine you're trying to learn.

Can Habits Be Manipulated?

If you were around in the early 1900's there is a good chance you would have gone without brushing your teeth. During the first world war most of the Army had such awful oral health that the military considered it a national crisis.

One hundred years ago, Claude Hopkins was having trouble selling a toothpaste called Pepsodent. He needed to convince the public that brushing would be benefit them and make it part of their daily routines.

He had to create a habit.

But first he had to come up with a trigger. Luckily nature was on his side. One of the most noticeable differences between clean and unclean teeth is the film that forms across them. Plaque starts to form within a few hour of cleaning. It made a perfect trigger. Claude ran national ad campaigns telling people to run their tongue along their teeth where the film was described as the reason for bad breath and tooth decay.

How would people remove the grimy film?

Conveniently, Claude's company sold the solution, Pepsodent toothpaste. This would become engrained as the response. Every time the people felt the film forming, Pepsodent would instinctively come to mind as the habit formed.

The reward was teeth that were clean and breath that was minty fresh. It was a hit. Everyone loved the toothpaste and it became famed for giving its users the "Pepsodent smile".

Claude managed to convince 50% of Americans to pick up a toothbrush everyday and purchase his product. Pepsodent has become a major case study for marketing students exploring how powerful habit creation can be for selling products...

Many people will give up because results don't show overnight. Keep in mind that it will take around 66 days and varies based on the habit and the person forming the habit. Don't focus on the end goal - stay focused on the process and create incremental tasks that allow you to keep momentum towards your overarching goal. If you're trying to break a habit, check out this post here.