Not Being Able to Code Is No Longer An Excuse.

Until about a decade ago creators were crying-out for a technical co-founder; one who could build a product from an idea, add a little flair and overcome technical glitches. 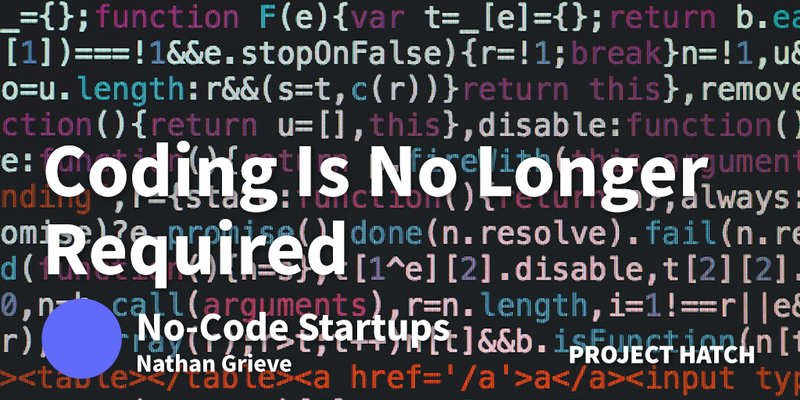 Why code is no longer needed. No code startups

If you have ever been put off starting a company because you don't have a developer - your excuse is no longer valid.

What is No Code?

No code projects are developed using platforms that don't require a developer. These can include visual builders, where drag-and-drop functionality is used. The only rule is that no coding knowledge is required to build your app.

Creating useful apps and websites no longer requires any coding knowledge. On top of that you don't even need much computer skill to get going. A curious mind, well thought out strategy and unbridled belief will get your idea off the ground very quickly.

Product Hunt is a proving ground for creators, users upload links to what they've made and the community will upvote interesting ideas.

Every year, Product Hunt holds a festival where they feature the best apps as voted for by their audience. This year was the first year they held a "No-code edition" in response to the increasing prevalence and (relative) ease of creating no-code apps.

Clearly they are shifting in response to a change in how products are made.

Who Benefits From No-Code?

Take a chef who has spent years honing their craft in high-end kitchens wants to teach the public how to create meals they'll love. Traditionally they would have to hire a developer, who would have limited incentive in their project or partner with a developer who would require a high salary/stock option.

As no-code tools have developed it has become possible for the chef to create their app alone and in less time than it would take a developer to custom build it.

Front end software such as Bubble allows you to create websites and back ends can be automated with softwares like Airtable as a data store, Zapier to connect everything and Klaviyo to fire out emails.

In the ecommerce space, Shopify has grown rapidly by allowing anyone with an idea to create a shop in minutes. This has lead to a rise of small retailers selling hyper-personalised products. Ease of use combined with their recent venture into fulfilment has made Shopify a serious competitor against Amazon. A lot of entrepreneurs prefer Shopify in this battle because they can host their own websites and have greater control of their business.

What Does This Mean

Low barriers mean more people can share their ideas. A person with no technical expertise can satisfy all of their creative urges without needing a team. This saves hugely on costs and reduces time-to-launch.

Instead of laying out $4-5,000/month for an mid-level developer you are now able to utilise the labour of elite ones through no-code applications. Everyone now has access to enterprise grade software for under $100 a month.

Makers can now spend more time branding and marketing their ideas. These two areas are where creators will be spending and increasing amount of time.

When ideas change, no code can allow you to make changes in hours instead of weeks. Whereas applications that are hard coded can become incredibly time consuming, especially if you use a developer that hasn't seen the code before. With no code you will only have to implement simple logic switches and your your change can be implemented the same day.

What About Those Who Want To Code?

Purists will still enjoy the challenge of writing their own apps and will continue to do so. By doing so they gain complete control over what they build - something you inevitably lose slightly when using a third party program. Apps they build will have the capacity for greater differentiation at the cost of taking a lot more time to build.

Even these purists will see the value in not completely running their own apps and will use cloud computing like Google Cloud or Amazon Web Services to host their products instead of adding hosting to their repertoire.

You will find very few business who try to do it all. Successful companies often have a narrow scope and focus on what they are skilled in. If you are building a sales training company you do not want to get bogged down in server softwares.

How Do You Compete When Everyone Can Make?

Over the next decade we will see a creativity boom in branding and marketing as this will become the biggest differentiator in apps. It is possible to clone most of the functionality of huge software giants without needing to write one line of code.

Zeroqode can guide you through the process of creating an booking app like Airbnb or dating app like Tinder in just a few hours.

A large number of the apps we have seen this millennium have been build by engineers. This has allowed those with coding knowledge an extreme level of influence over the rest of the population. Thoughts from engineers have become entrenched in our worlds and that isn't necessarily a good thing. Currently there is a huge volume of ideas, that have a huge impact on the world, coming out of one valley in California.

No code shreds the barriers entry and allows far more individuals ideas to be heard. Once an individual has an idea and gets their design ready, the technical side can be ready to go that same day.

Does This Mean Computer Scientists Will Become Redundant?

No code is incredibly useful for bootstrapping and creating minimum viable products. An increasing number of companies are launching 'no code'. It allows them to test and prove ideas very quickly before risking greater investment project.

No code platforms are created by software engineers and need to be maintained and improved, these will require a lot of engineers.

Engineers will still be used heavily by companies for custom work. Previously, engineers have been brought in on day 1. More creators are going no code to test and prove ideas before bring on developers.

The movement is about getting to the solution quickly when validating ideas. Your customers don’t care how you got there.

No code is reducing costs and reducing barriers-to-entry. It's an exciting time to be a creator.