Plato's Allegory of the Cave ft. Blockbuster and Netflix

That's because 19 years ago he got approached by Reed Hastings. Hastings was looking for $50 million to sell the company he created - Netflix. At the time, it was a DVD mailing service with grand ambitions. It was a small company that was ahead of the competition. 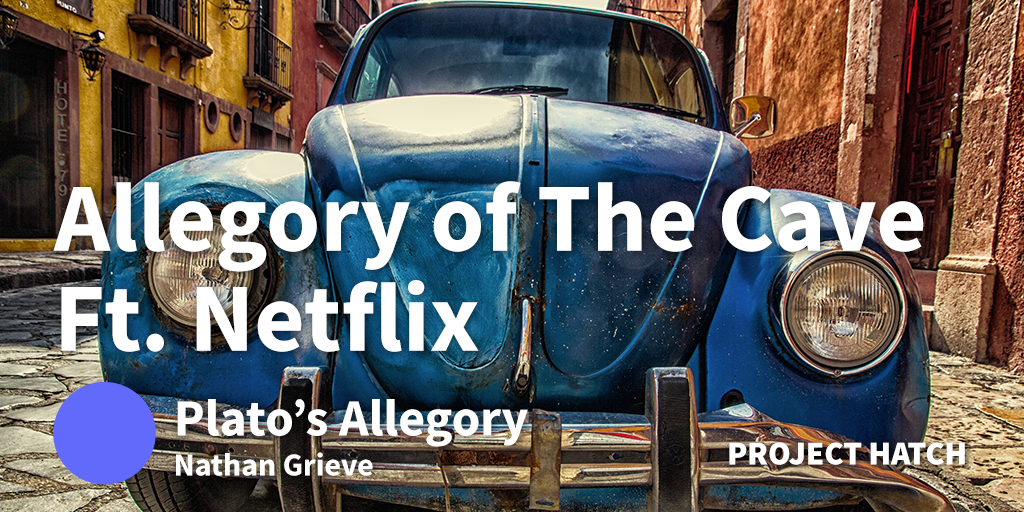 Antioco dismissed the start-up as a "very niche business".

Realising their mistake, Blockbuster attempted to offer delivery in 2004, 4 years after Hasting's approach. However, it was too little, too late.

Netflix now leads the streaming business with 151 million subscribers and $15.79 billion in revenue in 2018.

What leads to Antioco's way of thinking and what would Plato say?

Plato's most famous thought experiment is the "Allegory of the Cave". It comes in his dialogue, "The Republic".

Plato sets a scene with a fire, puppeteers and three prisoners who have spent their life in the cave.

The fire burns behind the puppeteers so the shadows project onto the wall in front of the prisoners.

None of the prisoners can turn their heads so all they can see are shadows on the wall in front of them.

All the prisoners can see are the shadows but have no way of knowing how or why they appear.

When prisoners see the shadows they think they are seeing an object. They have no way of knowing it's a shadow.

“And if they could talk to each other, do you think they’d suppose that the names they used applied to the things they see passing before them?”

When a prisoner says, "look there's a bird" his use of the word bird is to describe what he is looking at. But the prisoner is wrong as he cannot see the bird - he would have to turn his head to correctly apply the word.

The point Plato makes is that when we name an object we can see, we are actually naming something we cannot see. We ascribe names only to the things we can grasp with our mind and in process name one form of an object.

The prisoners begin discussing which shadow would next appear on the wall. Each prisoner makes a guess which object will show up.

When one of the prisoners get the answer correct, the others congratulate him. They think of him as more intelligent by guessing the right answer, despite all objects having an equal chance of appearing.

One of the prisoners manages to break free from the shackles and ventures outside the cave. What he discovers is that what he thought was real, was actually a projection.

The escapee struggles to come to terms with what he sees outside the cave and takes time to grasp what he is seeing. It dawns on him that everything he saw before breaking free was not real in the way he thought it was. For him to make sense of his surroundings he has to completely change his worldview.

The escaped prisoner returns to the cave to tell the other prisoners about what he has learned.

When he returns, the escapee finds the other prisoners quite content in their own world. They enjoy looking at the shadows andguessing what object will come next.He describes what he discovered on the surface, expecting them to try and escape with him. Instead he receives a frosty response and threaten to kill him if he attempts to free them.

The other prisoners find comfort in their ignorance. Resistance to education often results from fear and difficulty to accept alternative paradigms. It takes less energy to accept things the way they are.In this scenario, the CEO of Netflix resembles the escapee. He tried to explain that the way things are now is not the only way they can be.

He came across a different way of looking at the DVD market. Hasting's saw ways to utilise technology to improve consumer experience. Despite this, contentment with status-quo took president. Why change when the existing model is profitable?

This isn't the first time that a company has passed on a visionary who could have reformed their business. There have been many other bitter cases of "what if?" Comcast passed on Disney, Verison rejected the Apple iPhone deal and Friendster turned down Google.

What can we learn?

Plato presents the allegory as an analogy to describe the "effect of education and the lack of it in our nature".

Keep an open mind when hearing ideas that appear to contradict your own. Hear people out even when what they're saying appears farfetched.

Take a second look at things you believe as truth. A lot of our common sense knowledge comes from our senses. But our senses can deceive us - look at a stick held underwater and it appears to bend....And don't put people on a pedestal for getting guessing games correct.