Warren Buffett's 5/25 Rule (And How You Can Implement)

The "Oracle of Omaha", also known as Warren Buffett is the most prolific investor of our generation. In 2013 he made $37 million per day, and has some interesting methods of working and staying focused. Buffett's time is valuable and he manages it accordingly, but this isn't a recent habit. He attributes a large part of his success to planning and time management. 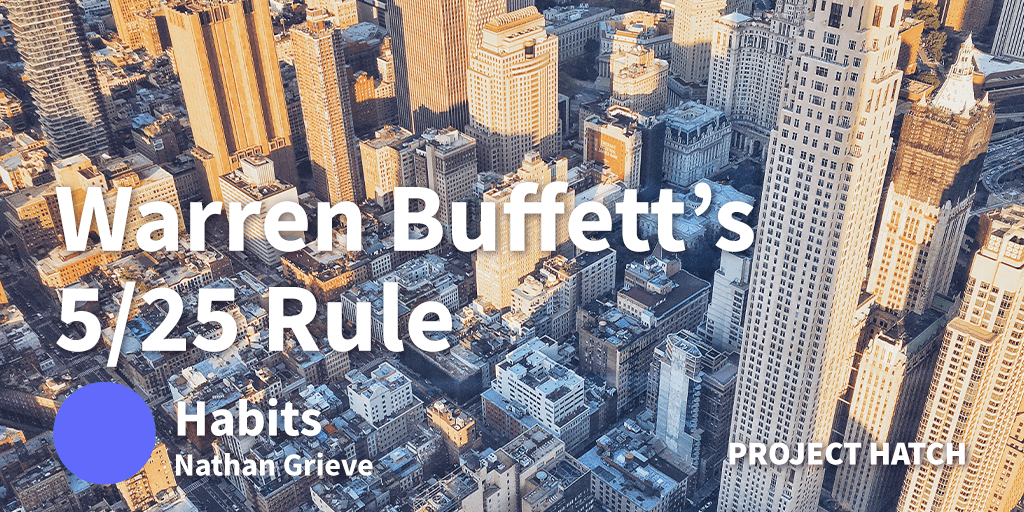 Who is Mike Flint?

Mike Flint had been Warren Buffett's private plane pilot for 10 years. Flint made his name for flying for past US presidents - safe to say, he was good at his job. He had an amicable relationship with Buffett and the pair often spoke about their ambitions.

“The fact that you’re still working for me tells me I’m not doing my job. You should be out, going after more of your goals and dreams.”

Buffett felt uncomfortable that after 10 years Flint was still working for him. He asked Flint to write down his 25 most important goals (feel free to do this yourself and follow along). It was the first stage in Flint becoming clearer on his goals and where he wanted to go next.

Next, Buffett told Flint to circle the ideas that were most important to him, the ones he needed to achieve. Flint had a lot of ideas on the list that were important to him, however, he managed to whittle it down to just five. (If you're following along, make sure to complete steps 1 and 2 before reading the next step.)

Flint's goals were now split into two groups. He had 5 he thought were his most important, and another 20 that he deemed less so. Flint thought he should focus on these top 5 and work on the others when he could make time. He saw them as less urgent but was still keen to work on them. Buffett had other ideas.

“No. You’ve got it wrong, Mike. Everything you didn’t circle just became your Avoid-At-All-Cost list. No matter what, these things get no attention from you until you’ve succeeded with your top 5.”

Buffett told him to forget about every idea outside the top 5. Flint was told to solely on the ideas that were most important to him and drop everything else. Only once these goals were achieved was he allowed to even think about the other ideas on his list.

“The successful warrior is the average man, with laser-like focus.” - Bruce Lee

“Concentrate all your thoughts upon the work at hand. The sun’s rays do not burn until brought to a focus.” - Alexander Graham Bell

Both rules are easily put into practice, leading to their popularity. The 80/20 rule can be applied to work, where often 80% of income will come from just 20% of your clients. The 5/25 rule also says you will find most of your results by just focusing on a small subset of your ideas at a time and following through on them until completion.

The biggest threats to your time are not the obvious ones. Eliminating habits like watching TV is simple as we consciously know it has nothing to do will a goal. The dangerous ones are the ones where you feel productive but aren't actually moving closer to your goal. When you are still manually inputting numbers, instead of using a software to do it, you are wasting time. It may feel productive as you are doing work but your competitors will have these tasks automated to focus on the their top 20% projects. When technology advances or you can delegate to your team with the same result, always do so.

One of the easiest ways to get more free time is to say no. You do not need a one hour long meeting to discuss something that could have been said in a two line email.

How many meeting do you have booked in this week?

Bill Gates once recounted a chat he had where Buffett showed him his diary. It had only 4 appointments for the next week. Do you think this is because no one wants to meet him? Warren Buffett is very good at saying no.

Sending an email or meeting people for coffee feels productive as you may talk about work. But an excess of these habits leads to lack of actual progress. They are all things you can afford to cut, or at least cut down.

Remove things from your diary that are easy to rationalise but have little long term benefit. These tasks stand in the way of progress, the ones meetings that are easy to relax in but don't produce meaningful results.

Every action we perform has an impact. Every action that appears neutral is not actually neutral. Every action will use time and energy that could be put towards more meaningful tasks. Time spend spinning in the same position is time that could have been used for something useful.

Your most dangerous habits are the ones you love but give you nothing back.