When The 80/20 Principle Becomes Dangerous

Jeff Bezos is the founder of Amazon.

He started his career on Wall Street where he spent 8 years climbing the corporate ladder, culminating in his appointment as a senior vice president, before quitting to start a bookshop. 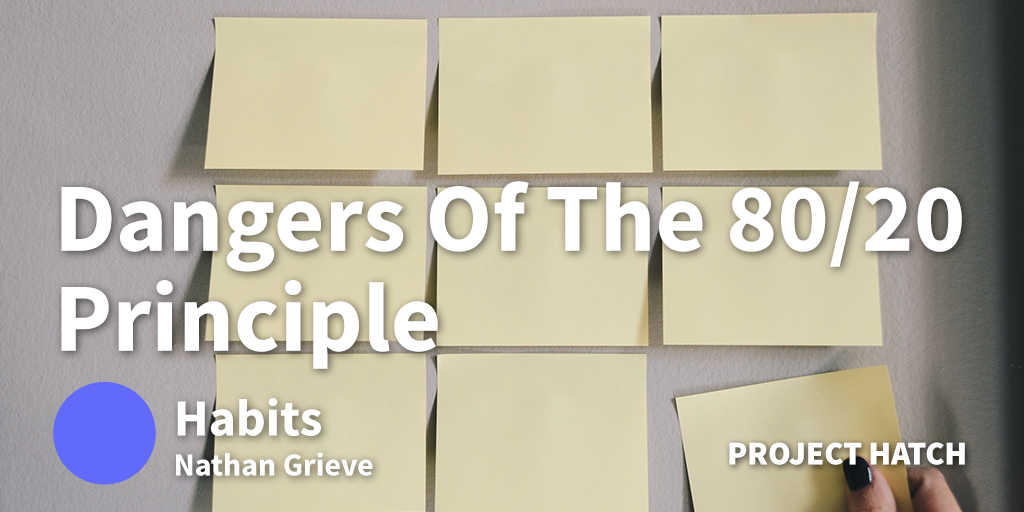 What could convince someone in his position to leave?

We will catch up with Jeff shortly.

Life is short. You need to spend time like a currency so it is not wasted.

Being effective is about making sure you focus on the things that will push you forward. Efficiency is about getting more done with less time.

The danger with efficiency is that you will focus on something that doesn't actually need to be done. Efficiency is only relevant when it is applied to the correct things.

How To Choose What To Focus On

The Pareto Principle states that, for many events, 80% of the results come from 20% of the work. It explores the idea that most results are driven by a small fraction of the work and it can be applied to many more areas than just business.

The wealthiest 20% have roughly 80% of worlds income.

"The principle was suggested by management thinker Joseph M. Juran. It was named after the Italian economist Vilfredo Pareto, who observed that 80% of income in Italy was received by 20% of the Italian population. The assumption is that most of the results in any situation are determined by a small number of causes."

When applied to business, the 80/20 rule will help focus your decisions. Concentrating on just 20% of tasks that present themselves is liberating and allows you to give the important things the time they deserve.

It justifies giving greater freedoms to top employees and ensures you focus time on surpassing the expectations of your best customers as they will drive the business forward. It frees time from distractions.

If you applied the 80/20 principle to Jeff's life when he was a Senior Vice President in a Wall Street hedge fund. What career choice should he have made?

Jeff was excelling on Wall Street and his appoint to senior vice president was testament to that. The Pareto Principle told him to double down on the areas he's strongest in. According to the rule Bezos should never have left the hedge fund.

In 1993 Jeff left his hedge fund job to set up an internet bookstore. At the time any metric for judging his' most effective path would have told him to stay at the hedge fund. He would be more likely to be wealthy, have better social status if he just continued his career on Wall Street.

The Pareto Principle evaluates your recent effectiveness. It looks at what you have done well in recently and uses this judgment to decide what you should work on next. This is also the weakness of the rule, it only focus on what you have recently achieved. You may have the potential to excel in other areas but according to 80/20 you should stick with the things you are doing well in. If you want a change or want to try something you've never done before you will be going against the rule.

Being effective often means you optimise what you have already been doing rather than looking at what you could be good at. The cost of being effective is you will miss creative opportunities.

What does this mean?

We are not all Jeff Bezos.

However, what he demonstrates is that even in areas where you don't have expertise right now, you can become effective at, very quickly. Evaluating big life changes based on how effective it is right now would mean you would never do anything new. There is no way to justify choosing something completely new over something you are already good at. When you evaluate with 80/20, new ideas often lose.

Jeff proves sometimes its beneficial to take the leap and break the rules.